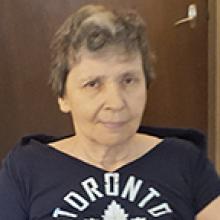 
It is with great sadness that we announce the passing of Barbara who died peacefully in Saint Boniface Hospital on November 7, 2022.
Barbara is survived by her husband Bob, nieces Jennifer Chapman (Stephen) and Kathleen Kudlak (Curtis), grandnephews Ben, Tom, and Jasper, brother-in-law Norman Kudlak, and cousin Karl Spilger (Ruth). She was predeceased by her parents, Wilhelm and Mae Hausman, and sister, Mary Kudlak.
Barbara was born and grew up in Kitchener, Ontario. She was educated at the University of Waterloo and graduated at the First Arts Undergraduate Convocation in 1961. She also received advanced degrees in Library Science from the University of Manitoba. Barb began her career as a high school teacher in Ontario and then as a teacher-librarian in the St. Boniface School Division in Winnipeg.
Barb was a born traveller. She accompanied her husband Bob on sabbaticals in the USA, at Oxford University in England, at the Goethe-Institut in Germany, and at Tottori University in Japan. Upon retirement she became a Snowbird, spending winters with Bob in Tampa, Florida.
Barb was an enthusiastic swimmer. She loved boating, hiking and bicycle riding, especially in the warm Florida sunshine. Tragically, she contracted Parkinson's Disease in 2015 and became a resident of the St. Norbert Personal Care Home. She was cared for by the wonderful staff at the nursing home until her death.
A Funeral Mass will be held at Mary Mother of the Church, 85 Kirkbridge Drive in Winnipeg, and will be announced later. Those wishing to be informed of the time and date may contact her husband Bob by email: bodnaryk@mymts.net.


To my wonderful wife of 55 years -
May flights of Angels sing thee to thy rest.