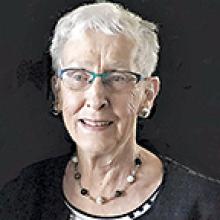 
With her children by her side, our beloved mother, grandmother, aunt, wife, and friend, Evelyn McConnell, passed away November 12, 2022. True to her strong character, she fought as long as she could. We felt fortunate and thankful that she could say goodbye to her family and as many friends as possible.
Mom was predeceased by her parents Elmer and Janelle Houck (Strachan), her husband Harold, her brother Ron Houck, uncle Bill Strachan, and her niece Kelly Chuckry. Mom was also predeceased by her brother-in-law Delmer McConnell, brother-in-law Jim Nelson, and sister-in- law Muriel Nelson.
Mom will be lovingly remembered by her sons Jeff (Pam), Brad and her five special grandchildren, Scott, Krista, Nicholas, Anna, and Megan, her Aunt Shirley, many cousins, nieces and nephews, and many dear friends.
Mom was born in Hamiota and grew up on the family farm enjoying a happy childhood with her Mom and Dad and younger brother Ron. She had fond memories of her early years on the farm. Often she would tell stories of biking the four miles to town, skating on the neighbours slough and riding the horse drawn sleigh to school in the winter.
Growing up on the farm meant she had chores to do. She spent many hours helping her Mom in the garden, making meals for the hired men at harvest time and feeding the chickens all while fighting off the mean rooster with a stick! Every time we would return to the farm she would tell us about sleeping in the shed while their new house was being built.
After her high school graduation in 1952 she enrolled in teachers training which at the time was called Normal School. Mom spent one year teaching grades 1-4 in a one room school in Decker. She then taught in Souris until 1958 when Mom and Dad were married. They moved to Winnipeg where Mom continued teaching at Bannatyne School in St. James. She stopped teaching when the kids were born. They remained in Windsor Park until they moved to Strathclair in 1969. With both Mom and Dad being from Hamiota they jumped at the chance to move closer to home. Five good years were spent there and many lifelong friends were made.
In 1974 Dad's job brought us to Neepawa where Mom became involved in the community right away. Church activities, the Curling Club, and the hockey rink became her home away from home.
As the years came and went judging at the Festival of the Arts, baking for the fair, delivering Meals on Wheels, and canvassing for the United Way were just a few activities she was involved with. Time spent volunteering for the Lily Festival was very important to her.
Her community involvement lead her to be recognized as a nominee for the 2008 Women of Distinction Award and being awarded with the Rotarian Paul Harris Award.
Mom worked in Neepawa for many years but it was working with friends that she enjoyed the most. Ebner's Mens Wear, Myra's Ladies and Mens Wear, Ryan's Denture Clinic and with Doug and Stella Old at the Esso Bulk Station.
Mom's hobbies included knitting, reading, and most of all gardening. Tending to her flowers was one of the highlights of each summer.
Mom and Dad spent many happy years together including family camping trips to BC and Clear Lake, enjoying mixed curling and socializing with friends and neighbours.
She easily made friends where ever she went and these friendships endured long after she moved from one place to another.
She always took an interest in the lives of her friends and their extended families.
The family would like to thank the staff at the Neepawa Hospital and Ward 3S at the Grace Hospital for giving Mom the best care possible.
Funeral services will be held on Monday, November 21, 2022, in the Neepawa United Church at 1:00 p.m., Rev. Chad McCharles officiating.
In lieu of flowers, donations can be made to the Beautiful Plains Community Foundation or the Neepawa United Anglican Church.