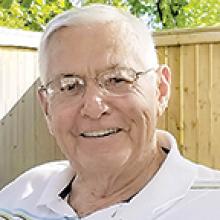 With great sadness, we announce the peaceful passing of Jack Lyttle, age 88, on November 8, 2022, with family by his side.
He will be lovingly remembered by his wife Gloria, of 64 years; three daughters and their families: Erin (Andy) Nagy, Shannon Hoeppner, Maureen (Cam) Hepples; grandchildren: Daryl (Emily), Brendan, Steven (Danielle) Robyn (Matt), Rory (Cindi), Krisjan (Jocelyn), Brennagh (Josh); and six great-grandchildren. Jack was predeceased recently by son-in-law Mark Hoeppner.
Jack was born on August 11, 1934, in Winnipeg. He grew up in the West End, graduating from Daniel McIntyre Collegiate. Jack was first employed by CPR, Trans Canada Airlines as a radio and radar technician, then CBC Television where his talent at electronics quickly promoted him to Technical Producer. He became Production Manager for many years until he retired in 1991. It was at CBC where he met the love of his life and best friend, Gloria. Married in 1958, they purchased a home in East Kildonan and raised their family. Growing up, Jack excelled at sports playing street hockey, baseball, rugby, and golf. As an adult, he played senior hockey, curled, and ran marathons but golf was his passion, playing until he was 85.
Camping was a part of family life; travelling across Canada was a highlight for our family. Most summers were spent at Falcon Lake. Dad and Mom later cottaged in Morson, Ontario where they enjoyed the company of family and friends. Jack loved their travels abroad exploring Cuba, Ireland, Europe, Australia, New Zealand and camping in Mexico. Later, they spent 30 winters at Bentsen Grove Resort in Palmview, Texas.
The family wishes to sincerely thank the staff on 5A of Holy Family Home for their compassionate care and kind support.
A service will be held at Immanuel United Church, 755 Golspie St., Winnipeg, Wednesday, November 23 at 1:30 p.m.


We love you Dad -
More than you will ever know.