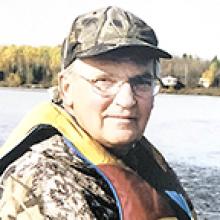 It is with heavy hearts we announce the passing of our dad Jack, on November 17, 2022.
Jack will be forever loved and missed by his girls Carol (Doug), Donna (Chris), Linda (Gary); grandchildren Scott, Jodi, Tyler, Joshua, Chloe, Emi and Grace and his great-grandson Noah. He will also be dearly missed by his sister Louise (Terry) and sister-in-law Marguerite along with many other family members and friends. He was predeceased by his wife Marion - he has missed her terribly over the past six years. He was also predeceased by his granddaughter Sara, parents John and Juliette, brother Gordon, mother-in-law Audrey, and sister-in-law Bev.
Bunny, as he was affectionately known, was born and raised in Fort Garry. On a visit to the Pony Corral, a cute waitress caught his eye; she became his "Sweet Pea", and they married in 1961. With both Carol and Donna being born in the same year it was decided the family would move in with Marion's parents where Jack formed a special bond with Marion's mom, Audrey. Linda was born six years later, completing our family.
Jack started his career at the CNR. He loved the beautiful historical domed building he worked in but mostly he loved that VJ's was right across the street. He moved onto the Department of Transportation with the Provincial Government where he spent many years before retiring.
Dad would always joke he had to get boy dogs so he wouldn't feel so outnumbered in a house full of girls, but that house full of girls was everything to him. He was so very proud to become a grandpa with grandsons he could do 'guy stuff' with and oh those granddaughters had him wrapped around their little fingers. His heart was more than overjoyed to be able to hold his first great-grandson.
Dad loved hunting, fishing, and Wednesday night shooting with his buddy Wayne. He loved taking his scooter to the pond to feed the geese, and there weren't many garage sales he would pass up. He was so funny and that sense of humour never faded. He would often surprise the nurses when he asked for a cold beer or a new truck when they asked if they could get him anything. He was an amazing, award winning, bird carver. He always enjoyed carving nights and the friendships he made. He was proud to talk about his carving or to be able to gift a carving to someone special.
There are so many people to thank: Dr. Coates - there will never be enough words to thank you for your kindness, compassion and many phone calls over the years while caring for Mom and Dad; Dialysis teams at St. Boniface and Seven Oaks - your gentle care for Dad over the last eight years eased the challenges of dialysis; Seven Oaks Urgent Care - your compassion in Dad's last days was inspirational and you are unsung heroes; Devonshire Staff - your humour and support of dad through the past five years made a difference; Homecare team - for your continuing amazing care, and of course, thank you to all the good friends he made along the way.
A service will be planned for a later date.
In lieu of flowers, donations can be made to the St. Boniface Palliative Care Unit.
Memories and condolences may be shared by visiting Jack's memorial page at seasonsfunerals.ca