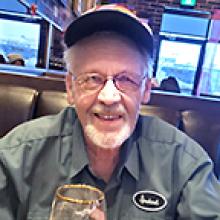 
Born to Elsie May and Albert Hillier in the town of Flin Flon, he is survived by his sons, Curt (Mandy), Kyle (Krissy); brother Jim (Leone); nephews, Ian and Colin (Fiona); plus five grandchildren, Dom, Ruby, Silver, Nate and Theoren. Lifelong friends from the Flin Flon gang have also lost a piece of their puzzle.
Working in sales for the majority of his life, Eldon travelled all over North America for training and factory tours. After receiving his university degree in 1972, he worked for Powell Equipment in Thompson, Manitoba while frequently visiting the Arctic. After moving down "south" to Winnipeg, Eldon sold everything from lumber to construction equipment, finally settling in the RV industry where he spent the last ten plus years working for Can Am in Headingley.
In retirement he enjoyed the company of his cats, stretching out on the couch and putting his feet up as much as possible. As long as there was chocolate and a TV, Eldon could make himself at home anywhere.
In keeping with his wishes, there will be no service or memorial.
Thanks to the staff from River Ridge II, ActionMarguerite unit 4AB and his hometown pals for keeping him safe during his Alzheimers journey.


Condolences for the family may be left at www.alternacremation.ca
"And if by chance you don't agree..."