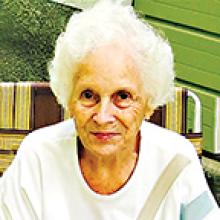 
Peacefully, with loving family at her side, after a brief time in hospital, it is with profound sadness that we announce the passing of Hilda, of Winnipeg, on Saturday evening, November 12, 2022, at Health Sciences Centre at 94 years young.
She is survived by her loving son Ken (Heidi); her adored grandchildren: Carolyn Blais (Chris), Erin Young (Bernard), Karen Batchelor (Jeff), and Michael Loschiavo (Bethany); her loveable great-grandchildren: Ryker, Ethan, and Ayra; her daughter-in-law Rosemary McDowell (Jim); nephews and other relatives. She was predeceased by her husband of 68 years, her first son Larry, her sisters Cordelia and Sylvia, her daughter-in-law Rosie, her parents Ellen and George Pankhurst and her in-laws Catherine and Frank.
On June 5, 1928 Hilda was born, grew up in the Weston area and graduated from Daniel Macintyre Collegiate. Then in 1948 she was introduced to a handsome young grad-student named Sam. Their hearts connected and next thing you know they were married on June 24, 1950 followed by a honeymoon in Clear Lake. Then they moved to Ottawa and three years later came their first son Larry. He was somewhat sickly but fortunately they had friends to help as there was no family support there. In 1956 Sam was transferred back to Winnipeg and not long after, in 1957 came the second son Ken. Over the years they would go on many vacations, as a couple, to Hawaii, Cuba, Europe or take cruises. Family car trips were from coast to coast in Canada and the USA. Then in 1976 Sam spent a sabbatical year at the University of Hawaii in Honolulu where Hilda enjoyed herself immensely. For years mom was proud to volunteer at the Victoria Hospital every Tuesday without fail. Then, in 1990, the saddest event of their life happened with the passing of Larry from cancer, an event that left an empty feeling in the family forever.
The highlight in Hilda's life was her grandchildren. Any ear she could find would hear how wonderful they are and how proud she was of all of them. In recent years came three great- grandchildren which puffed her pride even more.
Then in April of 2018 another sad turn was the passing of her husband after 68 years of marriage. We thought that Hilda would struggle after being married so long but she remained calm and carried on with the day-to-day support of the residents and staff at Lindenwood Manor.
A Celebration of Life is scheduled for 11:00 a.m. in the Heritage Room at Lindenwood Manor, 475 Lindenwood Drive E. Enter through the "Heritage" entrance. Interment at Brookside Cemetery to follow where Hilda will be placed for eternity with her waiting husband.
A special thank you to the Manor staff. Hilda could not say enough great things about you. She loved you all and the food too.
If people wish they may make a donation to a charity of your choice in memory of Hilda.