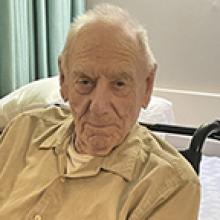 It is with heavy hearts we announce the peaceful passing of Emerick Joseph Bonne, with his children by his side on November 9, 2022 at the age of 96.
Emerick will be lovingly remembered and remain forever in the hearts of his four children, Pat, David (Cindy), Norman (Shelley), Marilyn Homer (Curtis); his eight precious grandchildren, Kristinn, Julie, Amanda (Josh), Gage (Alyse), Vanessa, Emily, Travis, Leah (Stephen) and his six great-grandchildren.
Emerick was born and raised in Fort Garry and resided there until he moved to his summer home in Sandy Hook, MB in 1990. Emerick worked as steamfitter apprentice as soon as he was released from the army in 1946. In 1966 he stared his long carrier with the Winnipeg School Division and retired in 1990.
Celebration of Life service will be held on November 23, 2022 at 2:00 p.m. at Thomson "In the Park" Funeral Home, 1291 McGillivray Boulevard, Winnipeg, Manitoba R3T 5Y4.
In lieu of flowers, donations may be made in Emerick's memory to the Alzheimer Society of Manitoba or a charity of your choice.