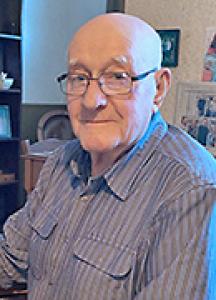 KINGDON: Kenneth Alexander Kingdon passed away peacefully on November 18th, 2022 at Birtle Health Centre. Ken was born along with his twin brother, Arnold, on November 10th, 1937 at the family farm in the Empire District of Clanwilliam. Walter and Annie Kingdon, older brother Art and sister Joyce, welcomed the boys. He was predeceased by his parents, Walter and Annie Kingdon and his 2 brothers, Art and Arnold Kingdon. Ken is survived by his loving wife Edith (nee Sedgwick), daughters Louise McInnes (Trent), Lesley Dabe (Rick), grandchildren Josh McInnes (Kristy), Jessica Gee (Kyle) and Kelli Tanski (Chad), and 4 great- grandchildren Iyla, Emma, Rhett and Charlee. He will also be dearly missed by his sister, Joyce Cameron and sister-in-law Bernice, his Sedgwick family and his many nieces and nephews. Ken grew up on the farm enjoying the horses, cows and family pets. He developed a love for antique cars and trucks. Due to the location of the Empire school (right across the road from the Kingdon farmhouse) the family was given the task of caretaking and hauling wood/coal for heating. Ken often told stories of sitting across the supper table from their teachers who boarded right at the farmhouse. So he had to behave and couldn't even pretend to be sick for a day off school. Many fond memories were made at the annual Kingdon family reunions held on the farm. Ken left the farm to pursue his plumbing career, but always returned for family visits, traditional Birthday and Boxing Day celebrations and especially to help Arnold at harvest time. Ken met his beautiful wife of 59 years, Edith Sedgwick, at a dance in Clanwilliam and they were married on June 29th, 1963. Louise arrived and they started their family, while Ken was still taking his plumbing/gas fitter course in Winnipeg. Ken and Edith moved to Rivers, MB and Ken worked for Brickwood's Plumbing and Heating. Their second daughter, Lesley, was born in Rivers. The family moved to Hamiota and Ken continued to work with Brickwood's Plumbing and Heating. Eventually Ken and Edie and the girls would settle into the community of Oak River, where Ken took over the water plant, and they called Oak River home for over 30 years. Ken began a new job with CFB Shilo Public Works and continued to work as a plumber/gas fitter until his retirement. He also participated with the Oak River Volunteer Fire Department, becoming the fire chief for many years. Ken received two very special awards during this time. One "In Appreciation of Service" from the Engineers Genie Canada of CFB Shilo. The other award that he was especially proud of was "In Appreciation for Many Years of Service on the Oak River Volunteer Fire Department." He was a loyal member of the Oak River Legion and the Masonic Lodge in Rivers. He was always busy with local plumbing jobs, revisiting lots of homes in Oak River and area for many years after his retirement. Ken made several wonderful, lifelong friends in Oak River. He was a well-respected and loved friend. Many have described him as a kind, friendly, caring, special guy and a great gentleman. He truly was one of a kind and we were so blessed to get to call him our friend, husband, Dad, or Papa! Ken and Edie moved to Minnedosa in 2001 where they have lived happily together, enjoying the garden, yard work and their amazing view of the bison, river and hills from their back deck. Ken was exceptionally proud of his two daughters and grandchildren. He lit up with smiles and giggles when Josh or Jess entered the room at any time! He was famous for his puffed-out cheek kisses, Papa waves, bowl of Cheezies, John Wayne westerns, Louis L'Amour paperbacks, and the crib games that he always won!! Back in the day he would be seen with an Old Port Tipped cigar and perhaps a beer and clam. Mostly Ken will be remembered for his unconditional love and support - especially of his family, but also his many friends and neighbours - always in ALL ways! A graveside service will take place at the Boyd Cemetery, Bethany MB in the spring. Further details will be announced.