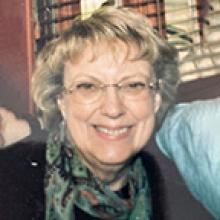 
Gloria Ellen Seale (nee Huxley), of Winnipeg, Manitoba, passed away on November 16 at the age of 90, of natural causes. The final few years of her life were spent at Riverview Health Center. She was predeceased by her husband of 68 years, Marvin Seale, in 2021. Her parents, William and Ellen Huxley also predeceased her in 1946 and 1986 respectively.
Gloria was born in Winnipeg and completed public school at Kelvin High School. After graduation, she trained to be a secretary, and then briefly moved to Vancouver with her mother. Upon her return to Winnipeg, she worked as a secretary at the University of Manitoba, where she met Marvin.
Gloria and Marvin were married in 1953, and after a brief stay in St. Paul, Minnesota, remained in their house in Norwood for over 60 years. They enjoyed the company of their friends, traveling, and spending time with their growing family. Together they had four children: Robert, Patricia Solomon (Hart), Maureen Fediuk (Randy), and Carolyn Seale (Scott Colwell). Grandchildren include Glynis Fediuk, Patrick Fediuk (Nicole), Cameron Fediuk, April Scholz (Nick Bruno), and William Scholz (Lia Whalen). In 2018, they welcomed the addition of great-grandson John Fediuk (Patrick and Nicole).
Gloria was an accomplished pianist from an early age and had an appreciation for all kinds of music and the arts. As well, she enjoyed entertaining and was a very talented cook and baker. She welcomed many people to the Sunday supper table, which was frequently full. At the age of 48, Gloria decided to attend the University of Winnipeg, where she worked diligently to obtain her degree in Art History. Her later years were filled with volunteer work at Dalnavert Museum, the company of friends, and the delight her grandchildren brought her. She also enjoyed travelling with Marvin and on solo trips, especially to see many friends she had made in the U.K. and other places.
Gloria's family extends their sincere appreciation to the staff at Riverview Health Center for the excellent and compassionate care she received in the final years of her life. The family also wishes to thank friends and family for their ongoing support over the years.
To acknowledge Gloria's love of animals, donations in her memory may be made to the Winnipeg Humane Society.
Cremation has taken place. A private memorial will take place at a later date