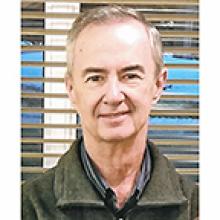 Ron passed away suddenly at the Grace Hospital on Friday, November l8, 2022 at the age of 73 after contracting Covid and undergoing hip surgery.
He is survived by his wife Yvonne of 49 years; son Neal (Lori) Einarson and daughter Louise (Jesse) Serra; grandchildren, Amber and Eddie Einarson, Zoe and Link Serra; his brother John (Harriett) Einarson; his sister-in-law Marilyn (Ken) Holland; as well as numerous nieces and nephews.
Ron was predeceased by his parents, Helen and John Einarson; in-laws, Elsie and Eddie Attwater; grandmother Olivia Einarson; as well as many aunts, uncles and cousins.
Ron was born in Winnipeg on September 25, 1949. He attended Grant Park High School and graduated Grade 12 from United College. He worked 43 years for the Federal Government in Winnipeg. He was a member of the Winnipeg Model Railroad Club, achieving many awards and becoming Master Model Railroader #593. Ron was a Red Cross blood donor with well over 50 donations.
Sincere thanks to all the staff at West Park Manor for your kindness and understanding in caring for Ron.
In lieu of flowers, donations may be made to the charity of your choice.
As per Ron's wishes, there will be no service.