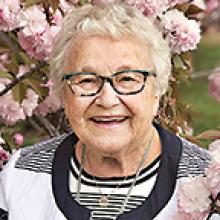 
Nellie Chorney was a force of nature. In her 101 years of gracing the earth, she lived every one of those to its fullest. Now, it is with profound regret, that we announce her death.
Remaining to cherish Nellie's memory are her grandchildren, Sean Helmkay (Kelly-Ann McCartney) of Ontario; Jill (John) Wheeler of Virginia; great-grandsons, Ben and Thomas Wheeler; great-granddaughters, Genevieve and Nellie Helmkay.
Nellie was born the third youngest of 14 children outside of Ethelbert, Manitoba. Her stories of growing up on the farm always left her great-grandchildren in absolute awe. As a teenager she decided to make her way in the world and moved to Kenora, Ontario. Here she worked many jobs, but it was a waitressing job that led her to meet the handsome chef, John Chorney. Their whirlwind romance resulted in 70 years of marriage and their beautiful daughter Jackie. After the Second World War, they settled in Winnipeg and built a life surrounded by family and friends. Through hard work and determination, they were also able to build a cottage on Falcon Lake. It was there that Nellie flourished. She was an avid golfer and fisherman. She loved early morning golf games and catching copious amounts of fish off their dock in the evening. She also became quite the popular figure in the Whitehall area for her delicious pirogies that she sold by the dozen out the back door of her home.
After retirement they spilt their time between Falcon Lake and Nova Scotia where their daughter and family lived. Nellie and Johnny travelled the world including Bermuda, Hawaii, and frequent trips to the US. After the tragic passing of both Jackie in 1998 and Johnny in 2011, Nellie continued to travel. Accompanied by her niece, travel companion and partner-in-crime, Bev Forbes, they made multiple trips to Switzerland, Florida, Arizona and Kelowna.
In 2016 she moved from Falcon Lake to The Parkway Retirement Community in Winnipeg. There she found many new friendships that she enjoyed over evening dinners, games of Bridge and the occasional happy hour. During her last few years, she depended greatly on the love and care from Vicki (her niece) and Brian Adams.
Nellie will be missed. Her love of life, wicked sense of humour, determination and generosity will be what she is remembered for. Most of all we will miss the love that she gave. Grams, we will always love you, love you, love you...
In lieu of flowers, please give to the charity close to Nellie's heart: Ukrainian Canadian Congress - Manitoba Provincial Council UCC - MPC Humanitarian Aid for Newcomers, Box 3567 Redwood Postal Outlet, Winnipeg, Manitoba R2W 3R4.
A Celebration of Life will take place on December 3, 1:00 p.m. at Wojcik's Funeral Home, 1020 Main Street, Winnipeg.