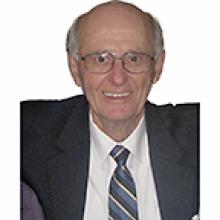 
Adam Gordon Hampton II passed away peacefully on November 18, 2022, at the age of 88, surrounded by the love of family, at Park Manor Personal Care Home.
Gord was predeceased by his wife, Lillian (Paul) Hampton on April 26, 2009; his brother, Reginald Morris Hampton on November 16, 2010; his mother, Eleanor (James) Hampton on March 1, 1999 and his father, Adam Gordon Hampton on November 6, 1968.
He leaves behind his children, Adam Gordon Hampton III (Lennie), Grant Paul Hampton (Rikki) and Leila Beth Hampton. Gord cherished his grandchildren, Amanda (Cassidy), Ashley (Alex), Adam (Katie), Mclean, Paul, Alex, Bryce (Tyler), Connor and Kierstin (aka 3/4) (Wyatt); as well as his two great-grandchildren, Cameron and Lily.
Gord was born on May 28, 1934 in Brandon, MB where he worked for years at the Brandon Mental Hospital. Later, he worked towards and received his Projectionist Certification. He then moved to Winnipeg where he decided to pursue a career in Hairstyling. He decided to open his own shop and bought his first location at 1096 Pembina Hwy. on July 1, 1962, naming it Gord's Hairstyling for Men. This would lead to an impressive career that would see him open a chain of salons. Ultimately, he would semi retire in 1991 when he moved his business to his personal residence at 149 Buxton Rd., finally retiring at the young age of 85.
Gord had a passion for woodworking and gardening which was evident to anyone who was lucky enough to enjoy his amazing yard. Gord's philanthropic community efforts made a significant difference to the residents of Fort Garry. He was heavily involved in the Kiwanis Club where he was instrumental in raising funds to aid in the build of the Kiwanis Plaza, countless hours spent organizing the Block Parent program, volunteered time to become a Curl Canada instructor and then helped establish a youth Curl Canada league from the Pembina Curling Club. Gord contributed to many University of Manitoba fundraising activities and then volunteered countless hours helping seniors health programs and seniors rights activities.
Dad made a difference in the life of his family in so many ways. Whether it be helping gut a house during renovations, providing advice, being a chauffeur, a shoulder to cry on and then helping to cheer us up by saying, "You're so beautiful when you cry". We will never be able to thank you enough, Pop, for the guidance, love and support that you showed us. Your tireless dedication to your family will forever be appreciated.
We would also like to extend a special thanks to the amazing staff at the Park Manor for the extraordinary care that you showed our Dad.
A private family service will be held.
In lieu of flowers, the family would ask that donations be made to CancerCare Manitoba in Dad's name.