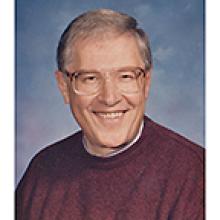 
Robert Hawksworth, beloved husband of Gloria, passed away peacefully at Misericordia Hospital on November 20, 2022.
Robert was predeceased by his parents, Eric and Lillian Hawksworth, younger brother Ronald and sister-in-law Helene. He will be forever loved and remembered by his wife and best friend Gloria, nephew Daniel (Andrea) Hawksworth, brother-in-law Frank (Pamela) Bann, niece Cristi (Devon) Danielson and family, niece Robyn (Scott) Stewart and family and special cousin Doris Weber.
Bob was born in Winnipeg on May 19, 1937 and lived his entire life here. After attending Lord Selkirk High School, he worked for several years at T. Eaton Co. Bob and Gloria were married in 1965. In 1967 he returned to school, receiving his B.A. from the University of Winnipeg and later his B.Ed. from the University of Manitoba. Bob spent 25 years teaching at Sanford Collegiate, retiring in 1997. After retirement, Bob became a substitute teacher in the Morris-Macdonald School Division. For many years, until his passing, Bob had been a member of St. Chad's Anglican parish.
Many thanks to the staff on the 6th Floor, Misericordia Health Centre for their care and compassion during Bob's final days.
A memorial service celebrating Bob's life will take place at 1:00 p.m. on Wednesday November 30, 2022 at Neil Bardal Funeral Centre, 3030 Notre Dame Avenue, with Reverend Dwight Rutherford presiding.
In lieu of flowers, donations to the Winnipeg Humane Society, or a charity of your choice, would be welcome.


Expressions of condolence may be left at www.neilbardalinc.com.