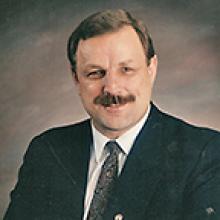 
Peacefully, in the early evening of November 20, 2022, Allan Richard Golden passed away at the age of 76 of natural causes.
Allan leaves to mourn his wife Sharan and his sons Brock who resides in Toronto, Michael (Amanda) in Winnipeg, grandchildren Estelle, Lydia, Olive and Harvey, his sisters Patricia in Thompson, Manitoba, and Joy in British Columbia, and his brother Thomas in Winnipeg. Allan also left behind many nieces and nephews.
Allan was born in Winnipeg at the Old Grace Hospital on November 6, 1946. His high school football career allowed him to attend several schools throughout Winnipeg and he boasted that he spent five years in grade 10 and had to go to Thompson, Manitoba to find a school left that he could go to. That is where he would go on to meet the love of his life, Sharan.
Allan came from a large family of ten children who lived in the Brooklands area of Winnipeg. He was never a stranger to hard work. After losing his father at the age of five, he set to work beginning his first job as a rag collector. He quickly took on other jobs including stucco mixing and straightening nails on construction sites with his best friend and brother Kenny. A short time later, in his youth, he began a paper route in the north and west end neighbourhood, which grew to include City Hall, where he met his "adopted father", Stephen Juba. Mayor Juba and Allan quickly formed a lifelong dear friendship.
Allan's entrepreneurial career saw him devote his life to several businesses including Academy Transfer, Ruben's Deli, Provincial Drywall Supply, Transcona Country Club, Comedy Oasis, St. Vital Hotel, and numerous investment properties. He also worked at Monarch Life where he was the leading salesman. After a run for Mayor in 1980, Allan eventually became the City Councillor for St. Vital from 1988 to 2000. Allan was proud to give out his home phone number and would answer the phone for his constituents day or night. He believed in public service and devoted many years to civic affairs. A steward of Winnipeg's historic buildings, Allan founded Old Market Square Association in 1978, and was a proud member of Winnipeg Enterprises while serving as City Councillor. Allan was instrumental in establishing Winnipeg's first recycling program, the Johnson Terminal at The Forks, building the Windsor Community Centre, getting the Goldeyes Baseball Park constructed for the 1999 Pan Am Games, and countless other community initiatives. He was a big promoter of and was very proud to live in Winnipeg.
Allan was there for anyone who needed him, be it friends or his family and never expected to be paid back. He turned no one away and had time for everyone. Allan was actively involved in the Big Brothers organization throughout the 1970s, after which he helped establish the Transcona Lions Club. He then went on to form the Golden Retriever Seniors Transportation Service to assist seniors in their daily lives. He also organized and looked forward to the Boxing Day parties at the Transcona Country Club. His support and concern for others was an example for all to follow. He touched so many with his warmth that he will live on in each of us forever. Allan loved to share a joke. To him there was no such thing as a stranger. He loved his family dearly and was able to have his grandchildren around to play with for a few years. His jokes lived on when Estelle, his eldest granddaughter, went on CJOB during a contest and won a turkey after telling one of Grandpa's jokes.
He was a long serving patron of the Greek owned restaurant community and in his 76 years, he never drove by the BDI without stopping.
He will be greatly missed by all who knew him.
Allan was predeceased by his infant son James Patrick in 1983, his father James Lawrence Golden, a career Canadian soldier in 1950, by his mother Kathleen Adele Golden in 1990, by his sisters, Helen Marie in 1977, and Julia May in 2022 and by his brothers, Michael Timothy in 1981 and Ronald Lawrence in 1985, Kenneth Arnold in 2010, and James Wally in 2014.
Thank you to the doctors, nurses, caregivers and aides who helped with Allan's care at home and at the hospital and in particular, Will, Melanie, Lily-Anne and Patty, his aides at home who were so devoted. Your selflessness and countless hours by his side will never be forgotten.
A family burial will take place at 1:00 p.m. Friday, December 2, 2022 at Brookside Cemetery, 3001 Notre Dame Avenue with services provided by Neil Bardal Funeral Home.
A Celebration of Life will be held the following day at 11:00 a.m. on Saturday, December 3, 2022 in the Fort Garry Hotel's Provencher Ballroom, 222 Broadway. All are welcome to attend.
For those who cannot attend, a virtual login is available via Zoom at algoldenmemorial.ca