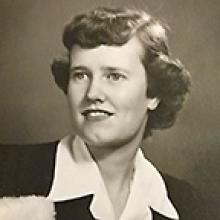 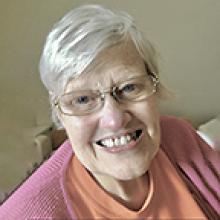 
With family by her side, Mom left us on November 15, 2022.
Jacquelyn Milton was born in 1931 in Regina, Saskatchewan during the Great Depression. As her father Stewart was a fieldman for U.G.G., the family had enough to help less fortunate friends and relatives. She learned that people matter most.
Jacquelyn had a happy childhood. Her daddy loved to tell stories, and her mother Winnie Mae, was an elocutionist. Mom and her brother, Byron, were saturated with poems and tales. She recited a poem on the radio at the age of two.
The women and children in their family would encamp for the summer at Prairie Lawn Farm near Carman to help her grandpa with chores, canning and the harvest. They husked corn, fed chickens, gathered eggs, and got to ride Gypsy Queen, a beloved retired racehorse who was sweet and gentle in her old age.
In 1938, her father was transferred to Winnipeg where Jacquie developed a deep love for her Milton family. She attended Wolseley School, making lifelong friendships with Helen Melvin, Pat Anderson and Donna Cawker. For junior high, she chose Isaac Brock School for the choir teacher Beth Cruickshank, who invited Jacquie to join The Winnipeg Girls Choir, as one of the original choristers. There, she was inspired to be a choral director.
In 1946 they moved to Saskatoon where she attended City Park Collegiate. In 1947, she contracted polio, but with perseverance and dedication to exercises and swimming, she recovered. She was always grateful for the polio vaccine as it meant swimming pools reopened and life returned to normal. Teaching swimming helped finance her education at the University of Saskatoon, where she graduated with a B.A. in Fine Arts, Music and Drama.
In 1953 the family moved back to Winnipeg. Mom worked as a lifeguard at Sherbrook Swimming Pool, meeting Frances McFarland, another lifelong friend. Dr. Ronald Gibson, the head of Music at the University of Manitoba became her mentor. Jacquie earned degrees in Pedagogy, Education, and later an Associate of Music. She joined Dr. Gibson's choir at Holy Trinity Church, becoming a dedicated Anglican. Mom found comfort in the style of music and prayer. She taught English, P.E. and Music at Miles Macdonell Collegiate.
In 1957, she moved to London, England to further her music studies at Guildhall School and Trinity College. She sailed home after a trip to Scotland in the summer of 1959, then taught music at Hugh John MacDonald School. She spent the summer of 1960 at the Banff School of Fine Arts studying Choral Leadership under Filmer Hubble.
In 1964, she married Gerald Barker, a geologist, and they moved to Cochabamba, Bolivia for his job. They took the opportunity to explore Bolivia and Peru. Taking a slow route home, they travelled through Brazil, visited Charles and Myrtle Barker in Trinidad and toured the West Indies.
They moved to Toronto, where Mom studied at the Royal Conservatory, then to Exeter and then Sharbot Lake. By chance, James Richardson Irwin of the Juilliard School of Music had retired there and taught her singing for three years. She used to say that she didn't go to Juilliard, but Juilliard came to her.
In the summer of 1965, she accompanied Gerald on a geological survey in remote Northern Ontario. She had the days to herself. When the bears came, she sang hymns in the tent. She would recall, "they either didn't like my singing or weren't Anglican, but they went away".
They adopted two boys: Michael in 1967, Gregory in 1969, and returned to Winnipeg in 1971, living on the same street as her mother. In 1973, Mary-Beth was born to them. Mom would read to us dramatically for hours. The Chronicles of Narnia were our favourite and she read them so often, that they became a collection of papers with no spine, bound only with elastic bands. When she grew weary of reading, she might try to skip ahead but we knew the stories so well that we would insist she read each word.
As we became more independent, she began teaching music again, working with students at the U of M Prep. Division thanks to Ann Lugsdin. The family church became St. George's in Crescentwood due to the boys' choir under the direction of Stewart Thomson. She founded a chamber choir, The Deo Gratias Singers, and made many new friends.
Mom loved the opera and theatre, Gilbert and Sullivan, the symphony and ballet and musicals like The Sound of Music. Her silliness cloaked her intelligence and intensity. She knew her worth and devoted her talent and attention to her students. She expected them to work hard even if she didn't always insist on payment. Mom was chronically late and her driving inspired passengers to believe in guardian angels. She faced many serious health problems with grace and courage insisting she "didn't have an ache or a pain".
Jacquie was known for her cheerful demeanor and her singing even when her mind was fading. We are so grateful to the 4th floor staff and volunteers at Lions Manor. Thank you for the incredible care and support you provided over the past eight years. We will never forget it.


Mom, we love you and miss your beautiful smile, gentle hands, lyrical voice, joyful laughter, inner strength, and constant encouragement. May you sing with the Seraphim.
- Michael, Greg, Mary-Beth (and John)


A memorial service is scheduled at St. George's Anglican Church (Crescentwood), 168 Wilton St., Winnipeg, on Saturday, January 21, 2023 at 11:00 a.m.
In lieu of flowers, donations may be made in Jacquelyn's memory to the Division of Preparatory Studies (University of Manitoba, Faculty of Music) Scholarship Fund, the Alzheimer Foundation, or a charity of one's choice.