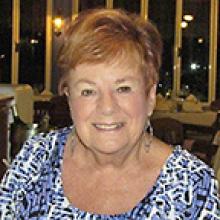 
With overwhelming grief and unending farewell tears, we announce the passing of our beloved, Judy. Judy valiantly fought to defend against the cruel effects of cancer. Regrettably, it was too much to overcome. The angels escorted Judy to her final resting place in heaven on November 19, 2022.
Judy was predeceased by her parents, Walter and Irene Chatterley. She leaves behind wonderful memories to her husband of 59 years, Brian, son Lindsay (George), their son Austin, daughter Lori Macario (Paul), their son Jordan, brother Donald Chatterley (Diane), sister-in-law Helen Smith, brother-in-law Murray McLeod (Connie), and many nieces and nephews and their children, about all of whom she deeply cared.
Judy was born on August 6, 1941, in Winnipeg. She attended Lord Roberts school and Churchill High school. She graduated from nursing school at the Winnipeg General Hospital in 1962 and, by 1967, was head nurse of the surgical ward. During the years that followed, Judy worked part time on various hospital wards while raising her two children. In 1984, she joined the Department of Infectious Diseases at the Health Science Centre where her strong drive and tenacity led her to earn further academic credentials as an Infectious Disease Practitioner. With this designation, Judy found her career both challenging and fulfilling with shared publications in numerous infection control journals. In 2004, the Health Sciences Centre presented Judy with the nursing excellence award. One of her favourite career highlights was co-founding "Bug Day", an annual event that educates health care workers on infectious diseases and mitigation measures.
In 2005, Judy retired and was immediately recruited by CancerCare Manitoba to develop and maintain an infection control program. Judy was instrumental in setting up the infection control spaces, practices, and programs until her second retirement in 2019. She found her calling in health care.
Judy was a long-time member of the Lutheran Church of the Cross, a church that her maternal grandfather helped to establish which provided the foundation to her relationship with God.
In her earlier years, she enjoyed the camaraderie of being part of the Junior League of Winnipeg, and was vice-chair of its thrift store. Within her Riverview neighbourhood, she found friendships and satisfaction with the Good Neighbour group. On a very personal level, Judy formed a team of health care workers, family, and friends called the "HSC Heelers" that annually participated in the MS Walk.
Judy was a talented pianist and gourmet cook. She loved preparing holiday meals for her family, especially at Easter, her favourite time of year. Judy was a patron of the arts and greatly enjoyed attending Manitoba Theatre Centre with Brian for over 35 years in addition to the ballet and symphony orchestra. She enjoyed swimming and luncheons with her good friends, the occasional bomber game and summer nights at the Goldeye Baseball games, especially if there were fireworks. She also appreciated quiet time with a good book or her favourite television show.
Judy's smile could light a room, her red hair was her signature, her humour was sharp and so too was her detailed storytelling.
Judy went through life in a quiet manner and did not like being in the spotlight. Keeping with her wishes, no formal service will be held. It was her hope that all the people who were touched by her life would understand.
Flowers are gratefully declined. If friends so desire, donations may be made in Judy's memory to a charity of your choice.