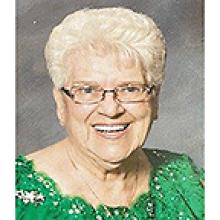 
Violet Evelyn James (Sharon) was born August 14, 1930, in Winnipeg, Manitoba and passed peacefully on October 30, 2022, at the age of 92 in Calgary, AB.
She was predeceased by her husband Eugene, mother Lillian (Nissel), Father Charles Frederick Sharon and her only sister June Adams. She leaves to mourn her nieces Sherin Rae, Margo Townsend, their families and nephew Robert Adams.
Violet met Eugene on a blind date, and they married August 24, 1958. She was initiated into West Kildonan Chapter #54 Order of the Eastern Star in 1963 and was Associate Grand Conductress there when Eugene was moved to Edmonton, AB. She affiliated with Pioneer Chapter #135 in St Albert in 1974, went thru the chairs, then Eugene transferred once again, this time to Calgary, AB. Violet affiliated with Chinook Chapter #133 in 1984 and went through the chairs to become Worthy Matron again in 1989 and 2010.
A devoted, dedicated, and hardworking member she served on the Board of General Purposes 1990, as Grand Treasurer 1991 and finally as Worthy Grand Matron of Alberta in 1994-95. She was also awarded distinctions in the General Grand Chapter – GGCCM Appeals & Grievances 2003-06, and GGC " Forever Friend" to MWGM Sis Bobbi White 2012-15.
Violet's life was devoted to Eugene, their several beloved canine companions – Gunner, Kaiser, and Bailey - and The Order of the Eastern Star. She loved bingo, was an avid bowler and was always working on a multitude of crafts until back pain sidelined her in recent years. She will be remembered as a dedicated member and hard worker, always willing to do her share.
In lieu of flowers, a donation may be made to Courageous Companions Inc.
Box 48074 St Albert, AB T8N 5V9.