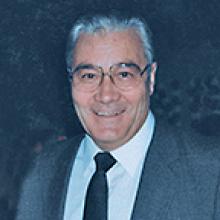 
Peacefully, William (Bill) Malenki passed away at Charleswood Care Home on November 20, 2022.
William was predeceased by his parents, Emil and Martha (Lukianik) Malenki; sisters, Nina Ozirney, Elizabeth Szabo; and brother John.
Lovingly remembered by his wife of 67 years, Katherine (Stecky); and three children, Brian (Donna), Brenda (Don) and Robert (Sharon); and grandchildren, Bill, Gina, Alyssa, Breanna and Peyton. Survived by his sisters, Olga Bymak, Violet Salyn (Metro); brother Harry (Lena); and numerous nephews, nieces and in laws.
Bill was born in Stenen, Saskatchewan on January 3, 1934. He grew up there while going to school and working on the family farm. He later moved to Winnipeg, and it is there that he met Katherine (Kay) at the local bowling alley. They married on November 12, 1955, and remained in Winnipeg to raise their family. Bill worked at a few jobs, and then settled into a career with Winnipeg Transit. He began as a bus driver, and then quickly became supervisor. He retired in January of 1992 and began a long rewarding retirement. He kept very busy, playing on 2-3 softball teams and curling in a few different leagues. He also began working at Brian's printing business and spending time with his grandchildren and their sports and dance activities.
Retirement was anything but boring for him, and he was busier than ever. When he had extra time, he was known for working in his yard and talking with his neighbours. Even in his later years when his health was slowing him down, he was still driving and meeting his friends for coffee a couple times a week.
Bill will be remembered for his kindness and always being there to help those who needed him. He was a caring husband, father and papa who always showed up for his family without ever asking for anything in return. He was very proud of where came from and often spoke about his Ukrainian heritage. He was fascinated by the internet and researched everything he could on many different topics. He spent time entering every contest and sports pool that he could, entering all his family and letting them keep the winnings.
The family would like to thank the staff at Charleswood Care Home where he called home in his last chapter of life. We are beyond grateful for the compassion and care you have given our father while he was there, especially in his last days.
If desired, donations may be made to Parkinson Canada or to the Winnipeg Humane Society.
A private family service will be held at a later date.