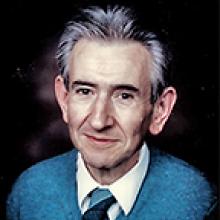 
We are saddened to announce the death of Moishe Singfeder Black on Thursday, November 24, 2022, with his Saskatoon family around him.
Moishe was born in Winnipeg, and aside from a few early years in Veregin, SK, grew up there. He attended the University of Manitoba, where he met his future wife, Gerry Bull. They married in Minneapolis on September 7, 1955.
Moishe and Gerry settled in Saskatoon in the late 1950s, where Moishe began a long career teaching French at the U of S until his retirement in 1995.
Moishe and Gerry were kept busy raising their three daughters, Dorian, Gillian and Martha, and spending time with friends and family in Saskatoon, and at Stephenson's Point on Lake Winnipeg in the summers. Moishe is survived by his wife Gerry, his daughters Dorian (Lorne), Gillian, and Martha (Glenn), five grand-children, and six great-grandchildren. He was predeceased by his parents Boris and Bertha Black of Winnipeg, sister Mindele Treip, and former son-in-law Ron Kachur.
A Celebration of Life will be held Thursday, December 1 at 1:30 p.m. at W.A. Edwards Family Centre, 333 - 4th Ave. N., Saskatoon. Parking is provided by Saskatoon Funeral Home directly across the street. Masking would be strongly preferred by the family.
In lieu of flowers, donations may be made to the Mennonite Central Committee Canada, or a charity of your choice.