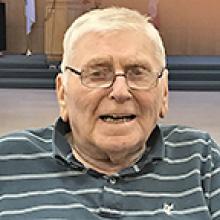 
Harry Krueger passed away on December 24, 2022 at the age of 95. He was predeceased four months earlier by his beloved wife Jean. He will be greatly missed by his children, Gordon, Nancy and Peter (Trish) and his grandchildren, Aaron and Amy.
Harry was born in Olchowo, Poland on October 15, 1927. He came to Canada with his parents as a baby and moved to Saskatchewan. Harry lived and worked in a number of cities including Montreal and Vancouver, but eventually settled in Estevan, Saskatchewan.
It was in Estevan that he met and married Jean. He said that if he had not married her, he would never have married. They were together for 70 years and had many wonderful times. Dancing and travelling were favourite pastimes. They especially enjoyed their yearly trips to Hawaii and later Arizona.
Harry was a natural salesman. He started as a young boy riding his horse to the neighbours to sell Christmas cards and garden seeds. He eventually settled into a career as a manufacturer's agent for a number of menswear lines. Harry was well liked and respected by other agents and especially by his clients. He was never in a hurry to get down to business; he was always ready for a coffee and visit first. Harry won Salesman of the Year awards on more than one occasion. He loved being on the road in his motorhome.
Harry was a social man who always had a joke or story to share. If you were his friend, you were a friend for life. He was very good at keeping in touch with friends, old and new. His greatest passions were golf and curling. He was an avid golfer and was very proud to get six holes in one in his life.
His family is grateful to the staff of Meadowood Manor for their care and patience over the past few years.
As per his wishes, no service will be held. A family interment will occur at a later date.