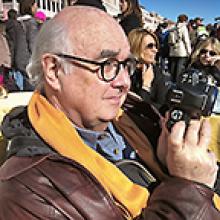 
After a rich and full life dedicated to public service and research, Dr. Richard J. Warrington died unexpectedly on December 23, 2022, in Winnipeg, MB, at the age of 79 years. The many people whom he touched in his life will remember his intelligence, humility, mentorship, kindness, humour, and empathy.
Predeceased by his parents, Jack and Ella Warrington of Rushden, England, he is survived by his wife of 19 years, Olivia (nee Sigfusson); his children, James, Stuart (Yumi), and David; stepsons, Murray, and Thor (Janna); and his grandson Liam and step-granddaughter Britta. Richard was a loving father and grandfather and a dedicated and loving husband.
Dr. Richard John Warrington was born in Finedon, England, on May 4, 1943, a war baby. His birth was so difficult that it shaped the course of his life; he suffered a birth injury known as Erb's Palsy, which was the start of his health problems. However, the damage to his spine, shoulders and arms that occurred at birth never defined him. He never complained. The recovery from his last surgery (which was successful) didn't go well and he passed away from complications while in the hospital. This gentle warrior finally had no more pain.
Professor Warrington considered the practice of medicine an art as well as a science. He brought this belief to his daily work and it shaped how he treated his patients, how he taught and mentored students, what he wrote about, and what he researched.
He trained at the Royal London Hospital, University of London, England, from 1961 to 1968, receiving a First Class Honours degree in Physiology and MB BS degrees (equivalent to a MD degree) and numerous awards for excellence.
Dr. Warrington came to Canada in 1969, moving to St. John's Newfoundland, to assist with the establishment of the new medical school at Memorial University. While doing this and raising three young boys, he was awarded a PhD in Cell Studies in 1973.
In 1974 Dr. Warrington relocated to Winnipeg with his wife, three small children, a dog and six guppies, pulling a camper trailer, to undertake subspecialty training. Upon completion, in 1976, he joined the Section of Clinical Immunology and Allergy at the Health Sciences Centre (HSC) in Winnipeg, MB, as an Assistant Professor.
Professor Warrington was the Section Head of Allergy and Clinical Immunology at Health Sciences Centre for 39 years. He trained over 50 subspecialty residents, with many now in senior positions nationally and around the world. He served as a knowledgeable, kind and patient mentor to trainees and offered highly regarded knowledge and experience. Dr. Warrington was awarded a Medical Research Council of Canada (MRC) Scholarship twice, once in 1980 and again in 1983, and was appointed Professor of Internal Medicine and Immunology in 1996. One of his roles included directing the Rheumatic Disease Unit Research Laboratory. He served as a member of the Board of Examiners in Clinical Immunology and Allergy of the Royal College of Physicians and Surgeons of Canada (Royal College), and served as Chief Examiner for six years. Then, in 2018, he received an award commemorating 30 years of service to the Royal College.
Further to his experience and leadership roles, Dr. Warrington was appointed Editor-in-Chief of the Allergy, Asthma and Clinical Immunology Journal in 2004 and remained in that position until his death. He became President of the Canadian Society of Allergy and Clinical Immunology (CSACI) in 2008 and subsequently was elected the first Honorary Member. From 2010 to 2018, he was appointed to the Public Health Agency of Canada's National Advisory Committee on Immunization (NACI). He also worked on the Centers for Disease Control and Prevention Committee (CDC) for herpes zoster vaccine for two years.
Dr. Warrington conducted ground-breaking research in drug allergy, rheumatic diseases, anti-cytokine antibodies, allergic responses to vaccines and myeloid suppressor cells. He published over 220 articles and abstracts in peer-reviewed journals.
On the national and international stage, Professor Warrington garnered the respect and admiration of his colleagues. He strived throughout his career to advance the specialty of Allergy and Clinical Immunology over-all, to foster the careers of his trainees and above all, dedicated himself to compassionate and expert care of his patients. He was a research mentor, a clinical role model and a strong support for early career colleagues.
Dr. Warrington was a Renaissance man; he had an eclectic knowledge base. He was a voracious reader who knew his science, his literature, and his art. His work ethic was very strong but so was his desire to see the world. He visited over 50 countries and had plans to see many more, including a trip to Japan to visit his son, daughter-in-law, and grandson.
Professor Warrington received numerous honours for his distinguished record of achievement and professional service, including the Jerry Dolovich Award for contributions in allergy and clinical immunology in Canada.
In 2021 Dr. R. J. Warrington was appointed Professor Emeritus of the University of Manitoba, after 44 years of service.
Sincere thanks to Dr. N. Berrington, Neurosurgeon, and Dr. K. Lamba, Internist, both of Health Sciences Centre, for their care and treatment of Richard.
If friends desire, donations may be made in Richard's memory to the Winnipeg Pet Rescue Shelter, (petrescueshelter.com) or to an animal shelter of their choice.
A Memorial Service will be held on June 24, 2023 at All Saints Anglican Church, 521 Broadway, Winnipeg, MB, with reception to follow. The Memorial Service will be livestreamed. Visit www.allsaintswinnipeg.ca for a link to the livestream, as well as directions to the church and parking information. A family interment will be held, after the reception, at St. Andrews on the Red Anglican Church.
An announcement, including the time of service, will be published in the Winnipeg Free Press Obituaries and on the Canadian Society of Allergy and Clinical Immunology (CSACI) website prior to the Memorial.


We love you so much Richard, Dad, Grandpa, and miss you beyond words.


We are saddened to announce the passing of our beloved husband, father and grandfather on December 23, 2022.
Detailed obituary to follow.