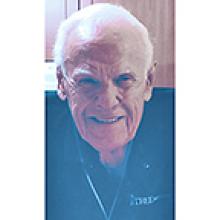 
It is with profound sadness that the family announces the sudden passing of Harry Melnyk on December 26, 2022 at St. Boniface Hospital with his family by his side.
Left to cherish his memory are his wife of 62 years, Sylvia (Antonation), daughter Tracey (Jeff) Caldwell, and son Tod. He is also mourned by his grandchildren, Kenzie, Delaney, Jaya and Cally, whom he adored. He will be missed by the extended Melnyk and Antonation families and friends. He was predeceased by his parents, John and Katherine and siblings Nick, Ann, Bill, Steve, Wally, Mary and Peter.
Harry was born on November 1, 1937 and grew up in the North End of Winnipeg. Harry was a successful and savvy business man managing the Rosewell and Elmwood Esso Stations during which he received many superior customer service and automotive mechanical capabilities awards. In his later years, Harry joined Manitoba Liquor and Lotteries where he excelled and made many friends before retiring in 2017.
Throughout his life, Harry sought experiences and adventures with family and friends including spending summers water skiing at Falcon Lake and Twin Beaches, family road trips and camping. In his free time, Harry enjoyed a good book in the sunshine, tending to his plants and cheering on his favourite sports teams, often watching multiple games at once to ensure he did not miss a moment.
Harry was a loving husband, father, grandfather and central member of his family known for his generosity, humility, and selflessness. Harry's faith granted him guidance in his everyday life and the gift of eternal life. Harry will be greatly missed, but the memories made together will be cherished forever including celebrating a beautiful Christmas together as a family.
The family wishes to thank Dr. Caners and the Manitoba Home Care staff for their loving care and compassion through the years.
A Celebration of Life will be held by invitation at Glen Eden Funeral Home on January 4, 2023 at 10:00 a.m.
In lieu of flowers, please consider making a donation to the Manitoba Lung Association in Harry's name.