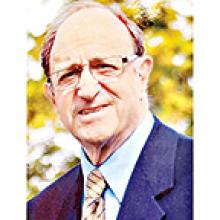 
Dr. Frank J. Albi, a beloved family physician and pillar of Winnipeg's Italian community, passed away peacefully in Calgary on January 7, 2023, at the age of 90.
Frank was born in Winnipeg on July 5, 1932, the youngest child of Frank R. and Gilda Albi. His father was one of the first immigrants from Grimaldi, a small town in Calabria, to settle in Winnipeg. Frank grew up on the corner of Wolseley and Sherbrook, the much loved little brother of Wilfred, Rose and Raymond. He attended Mulvey and Gordon Bell schools and made his mark on the playing fields, excelling in soccer and baseball. He started work at an early age. One memorable job, with his childhood friend Steve Demery, was delivering bread from a horse-drawn carriage.
Frank studied medicine at the University of Manitoba and interned at the St. Boniface Hospital. In 1958 he joined the practice at St. Boniface Clinic. Together with his brother Wilfred, he looked after the health needs of Winnipeg's Italian community. His dedication to his patients was legendary. An old-time general practitioner, he delivered babies, made house calls, and assisted in surgeries. After almost 50 years of dedicated professionalism, Frank retired from medicine in 2006, at the age of 74. He lived up to his personal motto of the three A's: Affability, Ability, and Availability - in other words, be there, do the job, and smile!
At the St. Boniface Hospital, he met a young nurse, Elaine Holub, and they married in 1962. They made their home on Middle Gate, just down the street from where he had grown up. They had three children, twins Frank N. and Gina and youngest daughter Carla. Frank was predeceased by his infant daughter Gina in 1964 and his dear wife Elaine in 2015. He is survived by his son Frank N. and wife Rosalind of Calgary, daughter Carla and husband Paul of Victoria, and four cherished grandchildren, Frankie, Hannah, Lauren and Ashley.
Frank was a devout Catholic and parishioner of Holy Rosary Church. He was active in the Knights of Columbus and the Catholic Physicians Guild of Manitoba. In the early 1980s, responding to a need in the Italian community, he, together with Josie Lucidi and Gus Cosentino, spearheaded the construction of Villa Cabrini at River and Osborne, a residence for seniors. He then brought his experience to the board of the Villa Nova, another seniors home established by the Italian community. For his exceptional efforts, he received from Mayor Bill Norrie in 1985 the City of Winnipeg Community Service Award.
It was impossible not to appreciate Frank's warmth, good humour and exuberance. He revelled in talking to people and hearing their stories. He enjoyed making the weekly rounds of De Luca's grocery store, Toni's barbershop, Canadian Tire, Casa Grande restaurant, and, on Sundays, spaghetti dinner with his family. He had fun golfing at Crescent Drive with his buddy Gus Cosentino and cousins John Albi and Freddie Albi. Most important to him, of course, was family. He was a devoted husband, supportive father and indulgent grandfather. He looked after the needs of his own father, his stepmother Rosaria, and his older siblings as they aged. He was especially close to Wilfred, his brother, colleague, and neighbour. He was beloved by his nephews and nieces, Andrea and Christopher and Guy and Christina.
Cremation and a private funeral service have taken place in Calgary. His family would like to thank the staff at Amica's Aspen Woods and Britannia in Calgary for ensuring that his final years were happy and comfortable. He will be laid to rest with his wife at St. Mary's Cemetery in Winnipeg in the summer, at which time his family will host a Mass and celebration of his life at Holy Rosary.