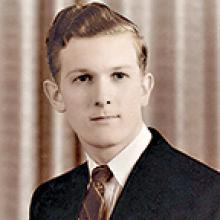 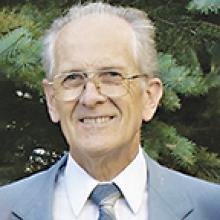 
On January 8, 2023, following a battle with abdominal cancer, Otto passed into the eternal care of God his creator, peacefully at home surrounded by family.
Otto was born on April 10, 1939 in Stettin, Germany. In 1945, his family fled to West Germany as the Russian Army advanced. In 1956, Otto immigrated to Canada, settled in Winnipeg and lived there with his brother until he found his own place. His first job was with Pioneer Electric in Fort Garry. Next, he moved on to CN Telegraphs (CNT) for an installer position which involved travelling from Thunder Bay, Ontario to Grand Prairie, Alberta and everyplace in-between. CNT eventually became CN Telecommunications where he worked as a data technician in Thunder Bay and later Winnipeg. Through mergers the company became CNCP Telecommunications and then Unitel.
In 1960, while visiting a friend in Winnipeg, Otto met the girl of his dreams, Ellen Clasen, and they were married on March 3, 1962. He took his beautiful bride back to Thunder Bay with him, where they lived until 1971 when they moved back to Winnipeg due to a job transfer. Their marriage resulted in three children, Monique (Guy Whitehill), Christine (Don Ross) and Kevin (Krista Wishart). He treasured his three step-grandchildren, Delaney Ross (Steve Burtnack), Devon Ross (Monica Lacey) and Patrick Whitehill and was also blessed with two granddaughters, Shevonne Ross (fiancé Myles Reid) and Tyanna Ross; two grandsons, Sawyer Wishart and Edward Birkholz, and three great-grandchildren, Austin Burtnack, Wyatt Burtnack and Daria Ross.
Left to mourn his passing are his sister Diemut (Dee) Schultz in Glen Head, New York and sister-in-law Erika Birkholz in Kamloops, BC, as well as many nephews, nieces, and cousins in various parts of Canada, the USA and Germany.
He was predeceased by his parents, Karl and Anna; three sisters, Giesela, Karla and Helga in Germany and his brother Dieter in Edmonton.
After Otto retired from Unitel in 1992, he took a part time office manager position with the St. James office of Citizens for Crime Awareness (CFCA). In 2000, he added the St. Vital CFCA office to his responsibilities until both offices closed due to lack of funding. Otto and Ellen served for over 40 years as Block Parents to provide a safe refuge for children in need.
Otto loved to sing and could make up harmony parts on the fly. Many hours on family road trips were passed with family sing-a-longs. Otto shared his love of singing by leading hymns for church services and singing in the choir for many years. He also sang in many small ensembles including duets with Ellen at church concerts. Otto was a talented sound technician, so when he wasn't performing himself, he was usually busy making others sound their very best.
Otto had an adventurous spirit and would try just about anything. He enjoyed water skiing, alpine skiing, parasailing, hand gliding, gliding, canoeing, snorkeling, hot air ballooning, motorcycles and small aircraft. If he felt fear, he never showed it.
Otto could fix just about anything. When his granddaughters were young, they were always bringing him things to fix and the only thing their Opi couldn't fix was the dead bird they brought him, but he turned that into a teaching moment about the circle of life.
In March 2022, Otto and Ellen celebrated their 60th wedding anniversary at a small gathering with family and a couple of close friends due to COVID-19 protocols. Otto and Ellen enjoyed traveling and visited many beautiful places including most of Canada, most of the United States including Alaska and Hawaii, Europe, Australia, New Zealand, Fiji, Mexico, Jamaica and Barbados. They are thankful for their church family and the members they got to know in various parts of the world.
The family is grateful to everyone who took the time to pray, visit, call, and send food, cards and emails to Otto during his illness. The family would also like to thank the caring doctors and nurses at the St. Boniface Hospital Palliative Care Unit and the skilled and compassionate palliative care nurses that provided the home care required to fulfill Otto's wish to spend his last weeks at home.
A celebration of Otto's life will be held at Chapel Lawn Funeral Home & Cemetery, 4000 Portage Avenue on Tuesday, January 17, 2023 at 2:00 p.m. Viewing will begin one hour prior to the service.