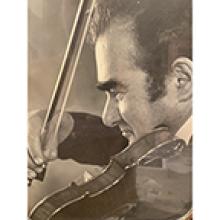 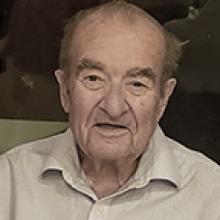 
It is with great sorrow that we announce the sudden and unexpected passing of Michael Bafaloucos on January 11, 2023.
Left to mourn are his wife of 52 years Andromachi; his two daughters, Eleni (Dimitrios) and Athena (George), and grandchildren, Christina (Nicholas), Spiro, Demetre, and Michael.
He was born on the Greek island of Andros on September 25, 1931. His early years were spent there with his parents and siblings. His passion for music, at the age of 13, led him to Athens to start his career. He studied for seven years at the Conservatorium of Music in Athens.
Michael was conscripted into the army when he was 20 years old and spent his tour of duty playing in an army radio orchestra. Following his tour of duty, he left Greece for Montreal to study at the McGill Conservatory of Music for eight years. It was at that time that he became known fondly as Michel. He joined the Winnipeg Symphony Orchestra in 1966 and performed there for 25 years. It was during the early years that he returned to visit the island he was born and found his wife, Andromachi. Both returned to Winnipeg and started their family. His family was most important to him. Despite finishing his career with the symphony, he was unable to put his violin away. He continued to play the violin up until his last days, and could often be found sharing his love for music with others.
Funeral service will be held on Tuesday, January 17, 2023, at 11:00 a.m. at St. Demetrios Greek Orthodox Church, 2255 Grant Avenue. Interment to follow at Brookside Cemetery. Coffee will be served.
In lieu of flowers, donations can be made in his memory to St. Demetrios Greek Orthodox Church.