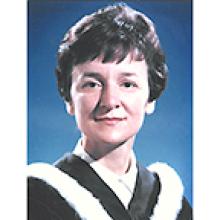 
Bernice Rzasa, only daughter of the late Bronislaw and Marja Rzasa passed away on January 12, 2023 at Seven Oaks Hospital.
She was born March 22, 1932 in Winnipeg. She received her early education in East Kildonan, attended St. John's High School from grade 7 and then the Provincial Normal School. She began teaching at Roseisle, MB and after two years returned to Winnipeg and taught at Luxton, King Edward, David Livingstone and Strathcona Schools. After attending summer courses at the University of Manitoba, she received her B.A in 1967. She loved teaching, not only for the privilege of working with the young children in her care, but also for the benefit of working with so many dedicated colleagues over the years.
She was predeceased by her beloved mother Marja on June 8, 1978 and her beloved father Bronislaw, on June 15, 1987.
After retiring she enjoyed numerous trips. She went to Poland, Hawaii, Mexico and the east and west coasts of Canada. She also began several new hobbies such as fishing and water colour painting and continued with others such as bowling and gardening.
Being an only child and having no relatives here in Canada, she felt blessed to have had many close friends to enrich her life. Especially Bill Solomon who cared for her after her stroke and welcomed her to be a part of his family. She wanted to acknowledge her high school friends Irene Garson and Sheila Gemmel for their friendship for over 65 years; as well as Jocelyne Jaremowich, Rose Polka, and Joan Moskal who showed their kindness numerous times when she needed assistance. With friends like these she never felt alone.
We would like to thank the nurses and doctors from St. Boniface Hospital and Seven Oaks, her GP Dr. Peter Bialy, and Dr. Barret of Seven Oaks Hospital for their care and compassion.
She will be sadly missed by dear friends, especially the Solomon family.
A private funeral service for Bernice has been held.