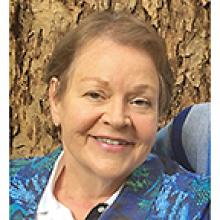 
Faye, beloved wife, mom, grandmother, sister and friend to many, passed away peacefully at Dufferin Place Care Home in Nanaimo, BC on October 20, 2022.
Her husband Jim, and son Tim, were with her throughout her final hours. She is also survived by daughter Tara (Chris), by grandchildren, Emilly, Calum, Nolan, Gavin, and Lauren, by siblings, Donna (Bob), Larry (Sandra), Stan (Eleanor), Peggy (Neil), Michelle (Tony) as well as many nieces, nephews and cousins. She was predeceased by her parents, Fred and Winnie Hilderman.
Faye was born in Regina, SK, on February 18, 1943, the first of six children. She grew up on her parents' farm, north of Semans, SK, until her family moved to Winnipeg, in 1959. After graduating from Sisler High she entered and graduated from the Winnipeg General Hospital School of Nursing as an RN. She nursed for several years before she and her first husband, Ernie Schwab, became parents to Tim and Tara, their chosen children.
Faye and Ernie moved to Banff, AB and then to Victoria, BC. After a career change, she worked as an accountant for several years. In a final career shift, Faye enrolled in St. Stephen's College in Edmonton in 2001, graduating in 2003 with a Masters of Arts in Psychotherapy and Spirituality.
While in Edmonton she met Jim. They married in 2008, and shortly after moved to BC where Faye had a successful counselling practice until she retired.
Faye's adventurous spirit led her not only to different professions but also different places as she loved to travel.
Music was always a big part of Faye's life. She was a talented vocalist, played the piano or organ, and assisted with church choirs as a member or choir director her entire adult life. She loved to have people around her and loved to host her family and friends.
Faye had a wonderful smile that was both bright and gentle. She made friends easily, kept them close, and had lifelong friends from every phase of her adult life.
Faye and Jim enjoyed 14 wonderful years together until her passing. She will be missed.
A memorial service is planned for June 1, 2023, in Parksville, BC.