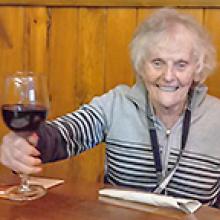 
It is with great sadness we mourn the sudden passing of Lorraine Joan Zammit, aged 92, on December 29, 2022 in Winnipeg.
Lorraine was born in Winnipeg on March 15, 1930 to parents Robert and Emily Poole. She met her husband Joe through an introduction by mutual friends. They married on August 28, 1954 and called Transcona home, where they raised four children. Lorraine was an avid curler, golfer and bowler. Lorraine's happy place was Gull Lake, where she and Joe bought a cottage in 1966. Even at 92 years, Lorraine was always the first one in and the last one out of the water at the lake. Lorraine was always the life of a party. She loved to meet people and made great lifelong friends and memories wherever she was. Her considerable energies and no-nonsense nature were surpassed only by her sense of humour. She and Joe travelled extensively in exotic countries and spent retirement years in Texas.
Lorraine was predeceased by her husband of 64 years Joe, parents, Robert and Emily, brothers, Lawrence, Allan, Robert and sisters, Edith, Dolly, Lillian, Allison and Arlene. She is survived by her brother Ken "the King" (Judy). Lorraine will be missed dearly by her children, Wade (Debbie), Jay (Deb), Dean (Wendy) and Jodi as well as by her grandchildren, David, Loren, Riley (Josh), Jessie, Zachary and Hayden. She will also be deeply mourned and missed by her close friend Aunt Bea.
Special thanks to our sister Jodi who was not only a daughter but also a care giving close friend of Lorraine's.
A Celebration of Life will be held at the Club Regent Hotel (1415 Regent Avenue) in the Blue Lagoon Room on Friday, February 3, 2023 from 2:00 p.m. to 6:30 p.m.