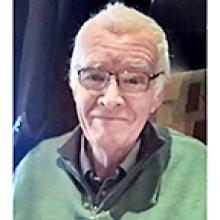 
It is with great sadness that we announce the sudden passing of Gordon "Gord" Edward Barr. His memory will endure through his loving wife Gloria, three children Jeffery, Sheila, Susan (Ken), grandchildren Devon, Hana, and Erika, family and his immense community of friends.
Gord was not only recognized by his impressive height and boisterous voice, but by his joyous personality and talent to make people laugh. Always positive, he possessed unmatched conversational skills, which he used daily in his career as a Custom's Broker. Later in life, he transitioned into a career at Walmart where his love of people and kind soul brought joy to the community. Gord was happiest around his family and with a plate of baked treats in his hands.
A Celebration of Life will be held at a later date.
Donations in his memory can be made to the Heart and Stroke Foundation.