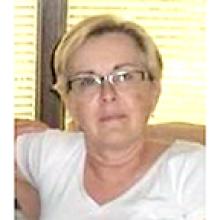 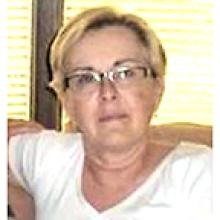 
Marika Banias, beloved wife of Ihor Michalishyn, passed away after a long battle with Parkinson's Disease on January 16, 2023.
She is survived by her husband, Ihor, their children, Patrick and Natalka (Andrij), her brothers Lubomyr and Ivan (Olga), her sister Martha, sisters-in-law, Gail, Kathy (Albert) and Mary-Anne (David), and her most recent pride-and-joy, her granddaughter Annika. Add to that all of her nieces and nephews: Vera, Oksana, and Roman, Michael, Marta, Michael and Lara, and all of their partners and children; Mama's love for family had no end, and she treated everybody like family.
Marika was born in Winnipeg to Michael and Olga Banias. She was raised in the North End, first on Polson and then Atlantic Avenue, and she worked at the family business, Arlington Meat Market. Marika became a teacher settling into Springfield Heights Elementary where she would teach up to three grades in the same year. Her ability to remember students' names and faces, decades after they left her classroom, was astounding.
Marika opened her heart and home to everybody. She would instruct piano and pysanka lessons to any friends who showed an interest. There would always be a buffet of food ready; if you walked through the door, be prepared to take a plate. Nobody ever went home hungry (or without leftovers). Mama was generous and selfless, and she always taught us to be kind to others.
Marika was very active in the Ukrainian community. She was a long-time member-turned-Podruha at CYM, and spent countless hours cooking, cleaning, and helping organize events at Prosvita and Sts. Vladimir and Olga Cathedral. When Marika had time off, her favourite place was in the forest, foraging for mushrooms and picking blueberries. Driving up to Ukrainian Park, pulling over and filling a few pails for suppertime at The Bus was a normal occurrence. Her knowledge of fungi was encyclopedic, and she passed that knowledge along to her nieces and foraging friends. She would get competitive about it, and the family freezer was always filled with dehydrated lisichky, hribi, and pidpenky for the 'off season'.
Marika retired from teaching after being diagnosed with Parkinson's Disease. It may have slowed her down, but she never wavered. She was a caring wife to Ihor until the end, and she was always in touch with her children, offering whatever help she could. She would still cook enough food for an army, even though it was just the two of them at home. And if anybody offered to take her mushroom picking, she would find the strength to go to her happy place.
Divine Liturgy will be followed immediately by the Panakhyda will take place at 11:00 a.m. on Thursday, January 26, Sts. Vladimir and Olga Cathedral, 115 McGregor St.
In lieu of flowers, donations may be made to the war efforts in Ukraine through United24 or The Canada-Ukraine Foundation.


We'll love you forever, we'll like you for always, and as long as we're living, our mama you'll be.
Vichnaya Pamyat.
KORBAN FUNERAL CHAPEL
(204) 956 - 2193
Condolences may be sent to
www.korbanchapel.com


It is with great sadness that we announce the passing of Marika Banias on January 16, 2023.
A memorial service will be held on Thursday, January 26, 2023 at 11:00 a.m. at St. Vlad and Olga Cathedral, 115 McGregor Street.
A longer obituary will follow.