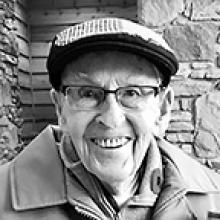 
It is with great sadness the family of Howard Swan announces his peaceful passing on January 20, 2023.
Left to cherish his memory are his sons, Brian, (Ruth), Dale and Kevin (Jenn); grandchildren, Sean (Sheri), Jeff (Bridget), Kelly (Peter) and nine great-grandchildren, many nieces, nephews, extended family and friends. Howard lost the love of his life Hazel in 2009. He was also predeceased by his three brothers and two sisters.
Howard was born June 23, 1921 in Winnipeg. In his early years he learned to play guitar and, by the age of 16, was performing at venues throughout Winnipeg. He played for many years with the Haymakers, the Lew Dickson Orchestra and the Bud McIntosh Band. Howard also worked for several years as a parcel delivery driver for The Bay, before becoming an EEG/EKG Technician at Deer Lodge Hospital.
After his retirement in 1986, Howard and Hazel spent the winters in Arizona where they made many long lasting friends. Howard was in his glory being able to perform almost every day at the music jams in many locations. Even at the time of his passing, he continued to perform with the Prairie Vaudeville Group in Winnipeg.
A special thank you to the staff at Lindenwood Terrace for making his last home a comfortable and enjoyable lifestyle.
Memorial service will be held at Chapel Lawn Funeral Home, 4000 Portage Ave. on Thursday, January 26, at 10:00 a.m.
In lieu of flowers, donations may be made to the Howard and Hazel Swan Music Fund at the Winnipeg Foundation, www.wpgfdn.org/HowieSwan.