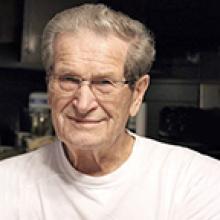 Rev. Peter Henry Janzen was born to Bernhardt and Maria Janzen on May 7, 1931 in their home near Glencross, MB. He was their second child, the only son with four sisters. At age 18 he was baptized in the Morden Bergthaler Church. On July 19, 1951 he married Dora Rempel, the love of his life. They spent 67 years together, raising two sons and five daughters.
Initially he worked at a meat packing plant in Winnipeg, and for a time owned and operated the store at Tourond, Manitoba. Peter was ordained as a deacon in the Niverville Mennonite Church and was later ordained as their minister on August 4, 1968. He graduated with undergraduate degrees from Mennonite Brethren Bible College and the University of Winnipeg in 1972.
Peter and Dora were invited to pastor the Faith Mennonite Church in Leamington, Ontario. From there, Peter moved his family to Kitchener to become the Conference Minister of the Conference of United Mennonite Churches in Ontario. While there, he was involved in the amalgamation of three Mennonite Conferences to form the Mennonite Church of Eastern Canada. During sabbaticals he studied at Associated Mennonite Biblical Seminaries in Elkhart, Indiana. Moving to Kitchener gave him the opportunity to study at the Waterloo Lutheran Seminary as well.
In 1991 Peter and Dora moved back to Manitoba to pastor the Winkler Bergthaler Mennonite Church. Later he served as interim pastor at Bethel Mennonite Church in Winnipeg and also the Whitewater Mennonite Church in Boissevain. Although he retired from active ministry in 2000, his heart for people and ministry continued to be evident. He helped as a resource to an east Asian church in Winnipeg, and took active leadership roles in the different facilities in which he lived. His ready smile and warm personality will be sorely missed.
Peter died in his home at Bethel Place, Winnipeg on Saturday afternoon, January 21, 2023.
He was predeceased by his wife, his parents, two sisters and two brothers-in-law. He leaves behind five daughters, two sons, and their families, two sisters, numerous extended family members and lots of friends.
Funeral service will be held on Saturday, January 28, 2023 at 10:30 a.m. at Bethel Mennonite Church, 465 Stafford Street, Winnipeg. The service will be livestreamed at https://youtu.be/_iQ5g92BnLo.
A private interment will take place at Green Acres Cemetery.
In lieu of flowers, donations may be made to Canadian Mennonite University or Mennonite Central Committee.