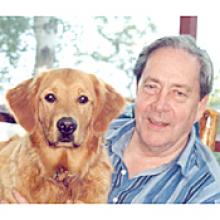 RICHARD JOSEPH CROWLEY It is with great sadness that the family announces the sudden passing of their beloved uncle and friend Richard Crowley on Wednesday, December 22, 2004 at the age of 77. He was a dedicated brother, uncle and great-uncle to his sister Margaret Miller and numerous nieces, nephews, their spouses and children. He will especially missed by his canine companion Jake . Richard was predeceased by his parents John and Margaret Crowley, sister Helen Paterson and brother John Crowley. Uncle Richard was born and raised in Winnipeg attending St. Ignatius School and St. Paul's College. He then joined his father and brother in the family business Jacob Crowley Mfg. till his retirement. His creative nature and passion for the outdoors, especially fishing and hunting, lead him to become an accomplished carver of decoys. He loved to spend his summers at Clearwater Bay with family. Uncle Richard was a longtime member of Ducks Unlimited, Manitoba Squash Club, Manitoba Club and the Darjeeling Missions where he made lifelong friends. In lieu of flowers donations can be made to Delta Waterfowl Foundation at 254-7400 or Heart and Stroke Foundation, 200-6 Donald St., Winnipeg, MB R3L 0K6. Funeral service will be held on Wednesday, December 29 at 11:00 a.m. at St. Ignatius Church, 255 Stafford St. Private interment will follow on Thursday, December 30. Uncle Richard we will truly miss you, your character, charm and wit will always be remembered and cherished. Watch over us and protect us. THOMSON FUNERAL HOME 669 Broadway - 783-7211