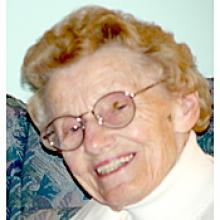 EUGENIA MARIA JAWORSKI (nee JEGER) It is with deep sadness that we announce the peaceful passing of our mother, grandmother and great-grandmother. Eugenia was born on October 17, 1907 in the village of Opilsk, Austria. As a young girl she had insatiable desire to go to Canada and on July 21, 1929, at almost 22 years of age, she arrived in Quebec aboard the ship Ausonia. Eugenia settled in Winnipeg and worked as a homemaker for families with young children. She met a handsome young man named Iwan (John). They were married on the 22nd of May, 1932 and shared the next 66 years together. Eugenia was a founding member of Saints Peter and Paul Church in St. Boniface and participated in many committees and other church-related organizations. She was an avid gardener and took pride in her home grown vegetables and flowers. As a gourmet cook, she was outstanding in her culinary abilities. Eugenia will be remembered and deeply missed by her two sons, Bohdan and Joyce of Winnipeg, Jerry and Helen of Ottawa; six grandchildren, Gary and Theresa of Winnipeg, John (Nancy), Maribeth (Claude), Christina of Ottawa and Jennifer of Chicago; six great-grandchildren, Christopher, Alexandra, Sarah, Nicholas, Bridget and Warner; sister Rose of Cleveland and many nieces and nephews in the U.S.A., Poland and Ukraine. Eugenia was predeceased by her husband Iwan; father Franciszek; mother Emelia; stepmother Jozefa; brothers, Casmir and Joseph; sisters, Maria, Kashia and Helen. Panachyda (prayers) will be held at 7:00 p.m. Monday, December 27 at Saints Peter and Paul Ukrainian Catholic Church, 390 Marion St., St. Boniface. Divine Liturgy will be celebrated at 9:30 a.m. Tuesday, December 28, also at the church with Father John Mostivsky officiating, assisted by Deacon M. Jacyna. Interment to follow in Holy Family Cemetery. Pallbearers will be five of her grandchildren and close friend Stacey Stoykewich. In lieu of flowers, donations may be made to the Sharon Nursng Home, 146 Magnus Ave., Winnipeg, MB R2W 2B4 or to a charity of your choice. The family wishes to express their sincere thanks to the Sharon Nursing Home staff for their loving care and kindness to our Mother. May God bless you and keep you until we meet again. VICHNAYA PAMYAT ETERNAL MEMORY KORBAN FUNERAL CHAPEL 956-2193