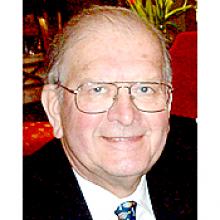 JOHN ALEXANDER BOVEY John Alexander Bovey, historian and archivist, died in Winnipeg on Wednesday, January 12, 2005. Born on February 11, 1934, John was the only child of Edith and Reginald Bovey. The seeds of John's lifelong enthusiasms were sewn during his happy childhood in Vancouver. He was educated in Vancouver and received his BA and MA in history from the University of British Columbia, and undertook graduate research at the University of London, England. He had a distinguished archival career of over 35 years, and in retirement he continued to contribute to the profession. He was Archivist of the Northwest Territories in the early 1960's, Provincial Archivist of Manitoba (1967 to 1979) and Provincial Archivist of British Columbia from 1979 until his retirement in 1998. He also served as the Archivist of the Diocese of Rupertsland and that of the Ecclesiastical Province of Rupertsland. Among his proudest achievements during his Manitoba tenure were the 1973 deposit agreement for the transfer of the Hudson's Bay Archives from London, England, to Winnipeg; and the transformation of the former Civic Auditorium into the Provincial Archives Building in 1975. In British Columbia, he established the Community Archives Assistance Program and was a founding member of the BC Archives Council. His contributions to the archival profession were many, including his early promotion of the use of the Internet for archival reference and research and the period he served as chair of the Provincial Documents Committees in Manitoba and British Columbia. He served on many historical and community boards including the Canadian Conference of Historical Resources, the Manitoba Record Society and the Historical Sites and Monuments Board of Canada. At the time of his death he was a member of the Council of St. John's College, University of Manitoba, The Manitoba Historical Society, Friends of the BC Archives and the Vestry of All Saints Church. Perhaps the most remarkable characteristic of John's distinguished career was his distinctive genius for bringing to life historical material that would otherwise have been forbiddingly dry, arcane or obscure. In the 1980's he shared his seemingly endless supply of revealing - and often hilarious - historical anecdotes with a wide audience during a regular weekly spot on a CBC radio program. His command of historical fact was formidable, but always offset by his ready wit, modesty and evangelical confidence in the importance of history. John was an omnivorous reader and brilliant conversationalist, who carefully recorded items of particular interest, amusement or irony in a little black book. He enthusiastically pursued interests including maritime history, opera, horticulture, gastronomy, art and literature, which he shared with his wife, children, family, and an army of devoted friends. A man of enormous charm and generosity, John demonstrated his affection for his friends and family with subtlety and imagination. Always loquacious, John's company was entertaining and instructive, as were his inimitable postcards and envelopes of newspaper cuttings. He will be sorely missed by his family, whom he cherished, and who cherished him, above all else. He is survived by his loving wife Patricia; his daughters, Alixe (Jeremy) and Katherine (Rory); his dear granddaughter Georgia; and stepgrandsons, Edward and Elliot; brothers-in-law, Ted Glover (Sophie) and Bill Glover; his nephew Stephen Glover; niece Cindy Glover; and great-niece Cassie Glover. A funeral service will be held in Winnipeg on Tuesday, January 18 at 1:30 p.m. at St. John's Cathedral, and a celebration of his life will take place in Victoria at a date to be announced. In lieu of flowers contributions may be may be made to All Saints' Church, 175 Colony St., Winnipeg, MB R3C 1W2, or the Manitoba Archives through the Association of Manitoba Archives, Box 26005, Maryland P.O., Winnipeg, MB R3G 3R3. THOMSON Funeral Home - 669 Broadway - 783-7211