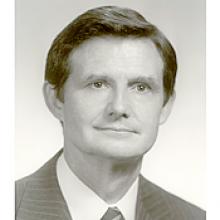 BRIAN CHARLES CAVANAGH On January 19, 2005, Brian died peacefully in Regina after a long battle with heart disease. He was born on April 16, 1930 in Abertridwr, Wales and emigrated to Canada in 1957 with his first wife, Angela. Brian was the British Trade Commissioner in Manitoba, Northwestern Ontario and Saskatchewan for 24 years. For his service to Great Britain, he was awarded an MBE by Queen Elizabeth II in 1981. His diplomatic career was followed by many years in private business. He helped in the early growth and development of the Winnipeg Symphony Orchestra and the Winnipeg Philharmonic Choir, and was active in the opera and church music scene in Winnipeg, Victoria, Vancouver, St. John's, and Regina. Brian is survived by his wife Lynn; his sons, Carl (Arlene) and Michael (Jackie); his daughter Christine (Todd); his sister Maureen; his niece Carol; nephew Gareth; sisters-in-law, Katherine and Pat and brother-in-law Robert; five beloved grandchildren, Danny, Derek, Hannah, Suzanne, and Amy; and many friends. Memorial service and celebration of Brian's life will be held at 4:00 p.m. on Saturday, January 22 at Central Lutheran Church, 12th Avenue and Angus Street, Regina. In lieu of flowers, please donate to the Heart and Stroke Agency in your community. Paragon Funeral Services entrusted with arrangements. (306) 359-7776