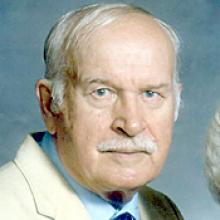 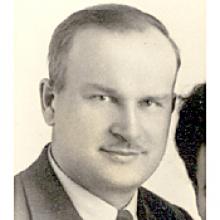 KASIMIR BILESKI September 14, 1908 - January 19, 2005 Dearly loved father, grandfather, great-grandfather passed away January 19, 2005 at Concordia Hospital at age 96. Kasimir is survived by daughter Jeannette Warga (Alex); sons, Eugene (Diane) and Felix. He is also survived by grandchildren, Tom Warga (Susan), Allison Pauls (Darrell), Kelly Shearer (Dave), Randy Bileski (Nancy), William Adelman, Elin, Kasimir and Gil Bileski; great-grandchildren, Caren Warga, Matthew and Jennifer Bileski, Charlotte and Michael Pauls; brother John; and many nieces, nephews and cousins. He was predeceased by his parents, Nicholas and Caroline Bileski; by his wife of 68 years, Eugenie in 2003; by grandson Yaron Bileski; and by five brothers and three sisters. Kasimir, the eldest of 10 children, was born in 1908 at his grandparents homestead near Alvena, SK to Nicholas and Caroline Bileski. After spending his first five years on the farm and being taught to read and write in three languages by his grandmother, his parents moved the young family to Saskatoon so the children could attend school. Kasimir was a quiet studious boy. At age nine he discovered the world of stamp collecting and from then on it was his life's passion. His first advertisement to sell stamps was in 1920 and he carried on his business until his 94th year. After graduating from Bedford Road Collegiate in Saskatoon and going to Normal School Kasimir became a teacher, being posted to various small towns in Saskatchewan. When, during the depression of the 1930s his salary was cut from $700.00 to $400.00 per year he decided to make the stamp business his full time avocation. He bought a motorcycle, took a small album of his very best stamps and headed across Canada to Montreal, where he sold the motorcycle and booked passage on a ship to London, England. In London, Kasimir haunted the auction houses: bidding, learning, buying and selling, becoming an expert in his field. In 1934 he wrote to his sweetheart back in Saskatchewan, asking her to come to London to marry him, which she did. Business was carried on there in London with Eugenie helping and learning along with Kasimir. By 1937 they missed Canada and returned, settling in Winnipeg, where they built a house and small office and set up their mail order stamp business. The business thrived, with clientele from all over the world. Kasimir attended many auctions, such as the President Franklin Roosevelt stamp collection, the King Farouk of Egypt collection, the American Bank Note Archive and many, many others. In 1959 Kasimir was instrumental in promoting the discovery of the Seaway Invert, one of the most spectacular Canadian stamp errors. He appeared on the television show Front Page Challenge, and stumped the panel with the news of this great error. He published many booklets dealing with his first love, Canadian stamps and was most generous in sharing his knowledge with other stamp dealers and collectors. Kasimir also loved to golf and always said, golf is the greatest outdoor hobby and stamp collecting is the greatest indoor hobby . When Parkinson's Disease struck him at age 70 he did not let it slow him down as far as work and stamps were concerned but it did stop his golf games. He contented himself with watching golf on TV and delighted in the exploits of Tiger Woods. Kasimir was a generous, kind soul who always helped anyone who asked and though proud of his Ukrainian heritage was most proud of being a Canadian. He was awarded the Governor General's Medal in honour of Canada's 125th Anniversary in appreciation of his promotion of Canada and Canadian stamps to the rest of the world. Many thanks to the staffs of Maples Personal Care Home and Kildonan Personal Care Centre for the care they have given to Kasimir. Funeral service will be held on Tuesday, January 25 at 10.00 a.m. at Cropo Funeral Chapel, 1442 Main St., with Rev. Fr. John Melnyk officiating. Interment will follow in Glen Eden Cemetery. If friends so desire, donations may be made to the Parkinson's Foundation. CROPO FUNERAL CHAPEL 586-8044