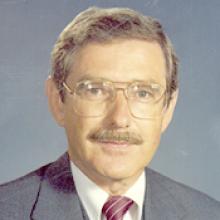 WILLIAM (BILL) W. DRAPER 1933 - 2005 Peacefully, surrounded by family, Bill Draper died on January 25 of complications following surgery for a brain aneurysm. His death comes as a shock to all, as he was a healthy, active man in his early years of retirement who exercised regularly with his wife Maxine, and was always careful to drink the prescribed two glasses of red wine per day. It gives his family consolation that his last healthy day on this earth was Christmas day, which he spent immersed in two of the things he loved best: his family and cooking and eating wonderful food. Born in Edmonton, Bill started his working life in the life insurance business prior to joining the Canadian Chamber of Commerce in Toronto in 1965, later becoming secretary manager of the Sault Ste. Marie Chamber of Commerce. In 1972, he settled in Winnipeg as assistant general manager of the Winnipeg Chamber of Commerce. Two years later he was appointed general manager, a position he held for 21 years. Bill had a long history of involvement with business and community organizations. He was president of the Chamber Insurance Corporation of Canada, chair of the Canadian Executive Services Organization (CESO), chair of the Board of the Canadian Society of Association Executives, and director of the Tourism Industry Association of Winnipeg. He was a member of the Board and Executive of the Manitoba Division, Multiple Sclerosis Society of Canada, president of the Chamber of Commerce Executives of Canada, and a life senator of Jaycees International. His extensive involvement with Winnipeg artistic organizations has included terms as president of the Winnipeg Symphony Orchestra, vice-president of the Manitoba Theatre Centre, and vice-chair and treasurer of the Manitoba Arts Council. Among his many awards, Bill was named an Honourary Citizen of the City of Winnipeg, given an Award of Special Recognition for outstanding citizenship by the Province of Manitoba, and a Governor General's Award for his significant contribution to Canada, his community, and his fellow Canadians. Bill retired in 1995 and moved to Vancouver to be closer to his children and grandchildren. In addition to his selfless devotion to his grandchildren and enthusiastically taking over the cooking from a relieved Maxine, Bill continued to be an active volunteer with CESO, working on numerous Aboriginal assignments and overseas assignments in Guatemala and Bolivia. He was also active with ESS, a local emergency preparedness committee, the Conservative party, and the Sunset Community Centre. Bill leaves many people who loved him, Maxine, his loving wife of 51 years; his children, Linda (Jay), Bonnie (Dan) and Jay (Barbara) and grandchildren, Kevin, Carly, Sophia and Anna. He was predeceased by his sister Irene, but survived by his younger sister Doreen (Don), and numerous nieces and nephews. He left us too soon, but lead a full life, enjoyed with gusto. A celebration of Bill's life will be held Friday, February 4 at the Floral Room of Van Dusen Gardens, 5251 Oak St., Vancouver, 1:00 p.m. to 3:00 p.m. Donations in lieu of flowers may be made to the Heart and Stroke Foundation.