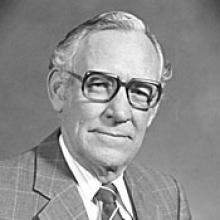 GEORGE GALT ALDOUS, BRIGADIER GENERAL, MC, CD. (RET.) 1920 - 2005 Peacefully, at the Riverview Health Centre, George Aldous lost his courageous eight year battle with cancer January 29, 2005. George is survived by his wife Barbara (Hamon), his son Monty (Verginia) and daughter Mardie Orshak (Jack); grandchildren, Kathryn McCullins (Mark), Bob and Christy Orshak, and Amanda Aldous. His sisters, Margaret and Mary (Sayons); his brother Alan; and his granddaughter Kimberley Orshak predeceased him. Born in Winnipeg March 26, 1920, George grew up in River Heights, where he met and married his best friend and beloved wife Barbara in 1942. He served his country as a gunner with the Royal Canadian Artillery in 1941, rising to the rank of Sergeant. In 1944 he went overseas as a Lieutenant, transferring to the infantry with the Royal Winnipeg Rifles. He served in Northwest Europe, Holland and Germany, received a field promotion to Captain, and was awarded the Military Cross for valour in action. From 1956 to 1960 George commanded the Governor General's Footguards in Ottawa, and the following two years he served as Colonel in charge of Number 12 Militia Group. His promotion to the rank of Brigadier General at the age of 43 made him one of the youngest to attain the army's top militia rank. He retired from the militia in 1965. Brig. Aldous was involved with people and community organizations wherever his 38 year sales career with DRG Packaging took him. His background in military training naturally led him to leadership roles. In Montreal he was a Cub Scout leader. In Ottawa he was a founding member of the Ottawa Retriever Club, serving as chair for several years, and becoming a life member. He was an active member, competitor and volunteer at the Ottawa Valley Trap and Skeet Club. He served on the Board of Governors of the Canadian Corps of Commissionaires as a Divisional chair both in Ottawa and Winnipeg. Brig. Aldous was a founding member of the Royal Canadian Army Cadets. From 1967 to 1980 he was a Board member of the United Services Institute of Ottawa, and was a life member of the Institute. His years of volunteer service with CNIB began in 1982, serving as co-chair of the Manitoba Divisional Capital Campaign; as a member of the Divisional Board of Management for 12 years, including five years as its chair; and he served on seven sub-committees. In 1994 George received the Canada Volunteer Award, nominated for his work with the CNIB. Again, in 2004, he received The Queen's Golden Jubilee Medal for his continued contribution with the CNIB and his community. A competitive oarsman in his youth, he later took up dinghy racing, as well as skeet and trap shooting. George also spent hours training and competing with his beloved Golden Retrievers. Growing up in Manitoba, he had a keen love for the Delta marsh and his family cottage in Keewatin. George was an active member of the congregation of St. George's Church, Crescentwood. Cremation has already taken place. A memorial service celebrating Brig. Aldous' life will be held at St George's Crescentwood Anglican Church, Grosvenor at Wilton, Thursday, February 3 at 2:00 p.m. In lieu of the transitory beauty of flowers, a more lasting remembrance of George would be a donation to the CNIB, the CancerCare Manitoba Foundation Inc., or a charity of your choosing. THOMSON Funeral Home - 669 Broadway - 783-7211