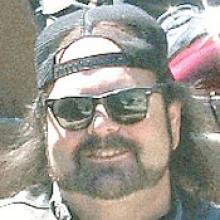 JIM (TINY) STEVENSON James Robert Stevenson passed away suddenly in his home on February 19, 2005, at the age of 51. Jim was predeceased by his parents Robert and Lilian Stevenson. Jim leaves to remember and mourn his passing, his sister Linda, nephew Stacy (Tracy), niece Sage, as well as many dear family and friends. Jim was born April 27, 1953 in Transcona where he grew up. It was here that he created many a lasting friendship and also where his passion for motorcycles and music began. Jim's career began in 1974 when he crossed paths with the comedy duo, Maclean and Maclean. He became their Road Manager. Together they did many tours of Canada and Europe. This led Jim to tours with The Guess Who, The Stampeders, David Wilcox, The Downchild Blues Band, to name a few. Tiny, as many know him, provided personal security for many, many stars. The most memorable was as the bodyguard for Mick Jagger during the infamous El Mocombo concert in Toronto in the late 1970's. In 1987 Jim added a new role to his career path. He helped forge the emerging Motion Picture and Television production industry in Manitoba, as well as the concert industry. This work in transportation continued until his untimely passing. Some of Tiny's best times were spent cruising the highways of North America on his Harley-Davidson. Those journeys always included the annual pilgrimage to Sturgis in South Dakota. Other favorite destinations included New Orleans, Arizona, and Fargo. Tiny gave his time, love and commitment to support Tom Jackson's Huron Carole, the unpublicized Christmas Eve Dinner for the homeless in Winnipeg, and any cause or soul who happened his way. Jim was caring, thoughtful, generous, and selfless. He constantly put others ahead of himself, regardless of his situation. Anyone Tiny came into contact with was left with an indelible impression, not soon to be forgotten. He touched many lives and will be sorely missed. In the immortal words of The Rolling Stones, raise a glass to the salt of the earth . In lieu of flowers please make donations in Jim's memory to the Canadian Diabetes Association. A special scholarship fund in his name will be created. A celebration of Jim's life will be held on Tuesday, March 1, 2005 between 5:00 p.m. and 9:00 p.m. at the East End Community Club, 517 Pandora Ave. E. KORBAN FUNERAL CHAPEL 956-2193