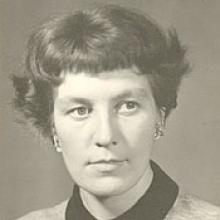 JEAN IRENE LAVENDER 1918 - 2005 Jean Lavender died February 23, 2005 at the Victoria Manor Care Facility in Lindsay, ON. Jean grew up in Winnipeg, attending Kelvin High School, then Wesley College. After completing her Library Science degree at the University of Toronto, she became a Music Librarian at the Royal Conservatory of Music, and eventually Head Librarian at the Faculty of Music, University of Toronto. She served there until the early nineteen eighties and will be remembered with affection and esteem by former students and faculty members. Jean's many enthusiasms included the world of arts and letters and an intense love of the natural world. Her travels at home and abroad brought her keen enjoyment and she had the gift of imparting her enthusiasm to others. She was a born raconteur, using a distinctive turn of phrase to make a simple anecdote memorable. Jean was predeceased by her parents, older sister Kitty and brother Dick. She is survived by her nephew Bill Stewart and family, niece Alison Darling and family and niece Deirdre Lavender, all of Winnipeg and nephew Harold Lavender of Vancouver, as well as cousins Betty Lavender of Winnipeg, Margaret Graeb of Toronto and Elsie Lorch of Salt Spring Island, BC. In later years she was blessed with the care and love of extended family members Pat and Jack Bousefield of Lindsay. Mass of Christian Burial took place at St. Mary's Roman Catholic Church, Lindsay on March 3 with interment at St. Mary's Cemetery. If desired, memorial donations may be made to the Alzheimer Society, 120 Donald St., Winnipeg R3C 4G2.