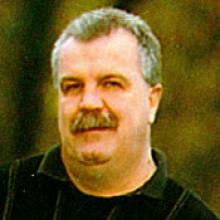 RICHARD DEREK BLIGHT The family of Richard Blight is devastated by the recent passing of Rick on April 16, 2005. Rick passed away at the age of 49 years. Rick was a loving husband and best friend to Donna, a wonderful father to Ryan and Sarah; a caring son to Don and Doddy; an only brother to Kathy (John), Leslie (Doug), Kelly (Jim) and fun-loving uncle to many nieces and nephews. Also he leaves father-in-law, Don Kerr; mother-in-law Jean Thompson; and brother-in-law Steve Kerr. Rick was born in Portage on October 17, 1955 and attended Oakville Elementary School and Arthur Meighen High School. He grew up playing hockey and at the age of 14 began with the Portage Terriers. At the age of 16, he was playing with the Brandon Wheat Kings and later was drafted in the first round by the Vancouver Canucks. He played with the Canucks from 1975-1980. He was married to Donna in 1978 in Vancouver, and two years later they gave birth to their first child, Ryan. In 1984, their daughter Sarah was born and Rick moved his family back to Manitoba to run the family business in Carman. Rick was a skilled golfer, with many tournament victories to his name. His passion then switched to curling, which continued after his move to Portage to run the Portage shop. He excelled at curling; making several appearances at the Safeway Select with the Don Spriggs rink. Rick loved to spend time with his wife and kids; whether it was barbecuing at home or meeting them in Winnipeg. Rick had a great sense of humour, which his family and numerous friends could all attest to. Rick lived a life that most people could only dream of. He will be greatly missed by all that were lucky enough to have known him. Service to celebrate Rick's life will be held on Thursday April 21 at 1:30 p.m. at the Portage Curling Rink, 2401 Saskatchewan Ave. W., in the Canad Inn, Portage la Prairie with Rev. Dee McEachern and Rev. Chuck Ross officiating. Interment will follow for family in the Oakville Cemetery. There will be a gathering to follow in the Oakville Community Hall. As expressions of sympathy, if friends so wish, donations may be made in Rick's memory to Portage Junior Curling Club, P.O. Box 337, Portage la Prairie, MB R1N 3B7 or Portage Junior Golf Club, P.O. Box 715, Portage la Prairie, MB R1N 3C2 or to a minor hockey association of your choice. When you are sorrowful look again in your heart, and you shall see that in truth you are weeping for that which has been your delight. The Prophet. A tree will be planted and cared for in memory of Rick by McKenzies Portage Funeral Chapel who are in care of arrangements. 857-4021. www.mckenziesportagefuneralchapel.com