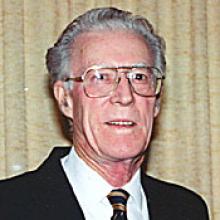 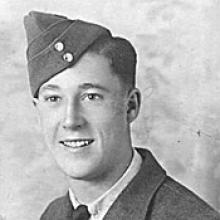 WILLIAM (BILL) CRAMER 1921 - 2005 With much sadness we announce the passing of a dear husband, father and grandfather on April 19, 2005. Left to mourn are his loving wife of 55 years, Roberta, eldest son Gregory and his wife Mona, their children Cloe and Francois of Winnipeg; and son Garth of Victoria, BC, his children Jordan and Paige, and their mother Michele. Bill was predeceased by his dad Albert, mother Eva, sister Jessie, brother Jim, and nephews Donnie (Jessie) and Barry (Jim). He was born in Baldur, MB on December 2, 1921 where he lived on the family farm until enlisting in the RCAF in 1940. He trained in radar and served overseas in England, Scotland and Africa for the duration of the war, attached to Royal Air Force squadrons responsible for coastal and submarine patrols. After the war he joined Manitoba Hydro in Portage la Prairie where he met and married Roberta Dyer. Married in 1949, they moved to Morden in 1950. He retired from Manitoba Hydro as District Supervisor and journeyman electrician in 1981. His years of public service included being the recipient of the Canadian Electrical Association Lifesaving Medal in 1947 for saving the life of an electrocuted lineman. Bill was an active member of the Morden Legion, a two-time Branch President and a recipient of both the Life Membership and Meritorious Service Awards. He was also one of the founders of Little League Baseball and was honoured in the 1970's with a special commendation for outstanding contribution to Boys baseball movement in Canada by the Little Canadian Baseball Commission. Bill enjoyed gardening and being a talented handi-man around his Stephen Street home of 50 years and in helping his sons. Cremation has taken place. A memorial service will take place at Wiebe's Funeral Chapel on Saturday, April 23, interment at 1:00 p.m., service at 2:00 p.m. In lieu of flowers donations may be made in Bill's memory to The Boundary Trails Health Centre's Palliative Care, P.O. Box 2000, Winkler, MB R6W 1H8.