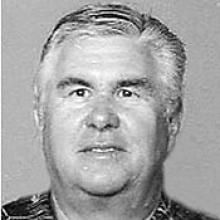 EDWARD VICTOR BARNES It is with extreme sadness that we announce the tragic passing of our beloved husband, father and grandfather Edward Victor Barnes on April 25, 2005 in Stonewall, MB. Ed was born March 6, 1947 in Eriksdale, MB and grew up in nearby Ashern. His mother and father Lloyd and Chrissie Barnes owned the local Cafe and he had many fond memories growing up in the Interlake. He married his high school sweetheart Barbara Geisler. They were the proud parents of a son Sean, who was born in August 1967. Dad became a radio operator in 1966 stationed at Resolute Bay in the Northwest Territories. The family moved to Sioux Lookout, ON in 1968 where he worked as a radio operator. Ed took his air traffic control training in Ottawa in 1969. This signalled the beginning of his 33 year career as an air traffic controller. After training, his first posting was Saskatoon, SK in 1970 where their second child, Shannon was born in December. In the spring of 1971 they moved to Winnipeg and finally settled in Stonewall in the fall of 1971. Ed settled in at the Winnipeg International Airport Control tower where he made many lifelong friends. Dad loved Stonewall and it's people. He loved to head into town, buy a paper and have a coffee with his friends. He was actively involved in the community through the Kinsmen Club, minor hockey, ringette and belonged to the curling club. He served as a town councillor in Stonewall for eight years - five years as deputy mayor and was very proud to help his community. He loved to volunteer his time and helped with events such as the World under 17 hockey tournament, the Canadian Baseball championships, the Brier and other events. He enjoyed fishing and the outdoors. Every year he looked forward to his annual fishing trip to Reed Lake in Northern Manitoba with his good friends. Mom and Dad spent a great deal of time on their houseboat on Lake of the Woods. Dad never sat around and was always trying something new. After his retirement he decided to get his class 1 driver's license. He occasionally drove a big rig, worked as a water taxi driver at the Forks and a part time school bus driver. Mom and Dad filled their spare time travelling. They just purchased a motor home and had grand plans to travel and become snow birds. Dad was in the process of building a large garage for their toys when the accident occurred. For a number of years, Mom and Dad hosted exchange students. They enjoyed having Julio Melo from Celayo, MX, Alfredo Salcedo from Leon, MX, Guntram Fischer from Halle, Germany, Cecy Salcedo, Leon, MX, Luly Salcedo, Leon, MX. They also developed a great friendship with Ana Paulina from Celayo, MX. They still maintain contact with their Mexican and German kids . Dad will be deeply missed by all of his family, his loving wife of 37 years, Barb, his son Sean, daughter-in-law Kristine, grandson Mitchell, granddaughter Kendall, daughter Shannon (Spencer), sister Sharon Brandstrom, daughters, Kristi and Kelli (Ian) Stewart; son Mark Doell (Tanya); mother-in-law Tillie Geisler; brother-in-law Ronnie Geisler (Joan) and their children, Debbie, Denise (Igor) Lisovsky, Deanne (Harry), Randy (Doris) and Susie (Vince) Wilkinson. In accordance with his wishes, cremation has taken place and his ashes will be scattered over four of his favourite places - Reed Lake, Lake of the Woods and the two homes they occupied in the Stonewall area. In lieu of flowers, donations can be made to the Canadian Cancer Society, Winnipeg Humane Society Building Fund or a charity of your choice. The family invites friends and colleagues to join them at a tribute to Ed, to be followed, in accordance with his wishes by a wake, on Saturday, April 30 at 5:00 p.m. in the old Stonewall Arena. MacKenzie Funeral Home, Stonewall in care of arrangements.