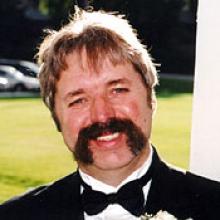 DAVID BRUCE KITCHING February 3, 1957 - May 29, 2005 It is with deep sorrow that we announce the sudden passing of David Bruce Kitching at his home surrounded by his family, in Winnipeg, MB on Sunday, May 29, 2005, at the age of 48 years. Left to cherish Bruce's memory is his beloved wife Kathy; daughters, Christine and Crystal, Jacquie (Wayne) and Michelle. He also leaves to mourn his dear Aunt Margaret Wheelan; cousins, Pat and Mike Wheelan and families of Ontario and second cousin Betty Rose Dracuss (Ken) in Steinbach, MB. Bruce was predeceased by his sister Lorna-Mae in 1975, father Edgar in 1986 and mother Nancy in 1996. He will lovingly be remembered by Kathy's parents Rose and Jim Kowalchuk, and her family; Cheryl Sinclair (Dave), Keri Kazuk (Richard), Glenn Kowalchuk, Ken Kowalchuk (Lisa), Randall Kowalchuk (Julie); numerous nieces, nephews and extended family: Dave and Georgette Taylor (he'll miss those fabulous peanut butter cookies!) and families, plus longtime bud Cheryl Skorodenski and her family. He will also be missed by his faithful and loving dog Charlie. Bruce was born to a military family in Ottawa on February 3, 1957. The Kitching family moved to Petawawa, ON in 1960, to Calgary, AB in 1961 and to Shilo, MB, where Bruce attended O'Kelly School. Bruce loved playing hockey and was a goalie with the Shilo Black Hawks Minor Hockey League in the 1969-70 season. He also participated in Boy Scouts of Canada as a young boy. The family soon moved to Winnipeg in 1970, where Bruce attended Sansome Junior High School and graduated from Westwood Collegiate. He was involved in track and field during these years. He attended Red River College and became certified in auto body painting and worked for a number of years for Midway Chrysler in Winnipeg. In 1992 after deciding on a career change he was thrilled to join the City of Winnipeg Fire Department. He recognized and accepted the dangers of the job and was extremely honoured to be part of the team. Bruce was a very dedicated, compassionate and skilled firefighter. In his 14-year career he obtained certification within the department for Tech Rescue, Trench Rescue, Water Rescue, Auto Extrication and Fire Medic certification. Bruce loved his work and found it extremely rewarding. He served out of Stations 6, 12, 11, with Station 20 in St. James being his last station. Bruce was an active volunteer with the Firefighters Burn Fund. He was a Burn Camp counsellor and worked with burn survivors at Camp Mamawi for children. In 2003 he was selected to accompany a young burn survivor to the International Burn Camp held that year in Washington, DC. Bruce also served on the Board of Directors of the Firefighters Burn Fund and for the past couple of years voluntarily looked after sales of firefighter logo clothing to benefit the Burn Fund. Kathy and Bruce's families enjoyed helping him with this. Bruce enjoyed cycling and participated in the Firefighters Burn Fund Cycle-a-Thon over the years. He enjoyed had a lot of fun being Sparky the firedog during parades. He was a member of the Firefighters Historical Society and was often called upon to drive the Historical Society pumper for various functions. Bruce, Kathy and their children participated in the Festival of Lights parade. Bruce enjoyed life to the fullest! He was known for his one-liners and his handlebar moustache . He was an amazing 70s music buff, Beatle Styx fan, Jeopardy game show devotee, Winnipeg Jets Hockey Season Ticket Holder with his dad, and a Trekkie . Bruce took pride in his '71 Cuda that he had beautifully restored with his good friend Ray. Bruce was multi-talented and many can attest to his excellence in cake decorating. His home reflects his talent at creating stain-glass art. Bruce also loved to sing and had learned to play the guitar. He sang with Kathy in the St. Charles Folk Choir. Bruce enjoyed camping, canoeing, the outdoors, his pool, barbecuing, swing dancing with Kathy, and evening campfires in his backyard regulation fire-pit! Most of all, Bruce was a loving husband to Kathy his rock and devoted father to his children. He often volunteered for at their schools and numerous sports including Ringette coach with the Assiniboia West Recreation Association. He received an award for community service from Linda Macintosh. Bruce loved to travel and was looking forward to camping this summer with his new truck and trailer, going for walks, and being outdoors after a very long, hard winter. The family would like to express their deepest thanks and appreciation to Susan Young and the fast thinking staff of the Royal Bank at Portage and Parkhill, Dr. K. Warrian and associates, all the caring nursing and support staff of the St. Boniface Hospital Emergency Department, S.I.C.U., CVT Step-down Unit, CVT Ward, 5th Floor Cardiac Unit, MICU, Physiotherapy Department, Grace Hospital Emergency Department, Health Sciences Centre Rehab Department, Community Health Nursing staff, and homecare staff. Our appreciation and thanks also go out to the staff and management of the Winnipeg Fire and Paramedic Services and Alex Forrest and UFFW for their ongoing support. A special thanks to Station 20; Paramedics, and crews of Squad 20 and Engine 20. Celebration of Bruce's life took place on Friday, June 3, at 11:00 a.m. at St. Charles Roman Catholic Church, 320 St. Charles St., Winnipeg, with Chaplain Mark Young officiating (cremation and interment at Brookside Cemetery to take place at a later date). Active pallbearers are Wayne Burch, Claude Lambert, Joe Lepieszo, Gerry Smit, Jim MacDonald, and Ray L'Arrivee. Honorary pallbearers are Dave Sinclair, Richard Kazuk, Murray White, Ken Philpot, Robert L'Arrivee, Ron Bowes, Wayne Skorodenski, Mike Skorodenski, all brothers and sisters of the Winnipeg Fire and Paramedic Services, plus Jim McMurtrie and the breakfast club . THE WORLD IS A BETTER PLACE BECAUSE YOU WERE IN IT. YOU'LL ALWAYS BE IN OUR THOUGHTS Bruce, we WILL dance again, Love Kathy In lieu of flowers, donations in Bruce's memory can be made to the Firefighters Burn Fund. THOMSON FUNERAL HOME 783-7211