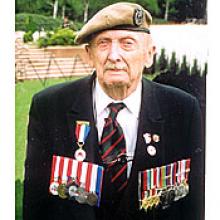 MAJOR (RET'D) ALAN DOUGLAS FAIRBAIRN Suddenly, at his residence on Saturday, May 28, 2005, our dear father, Alan passed away at the age of 85 years. Dad had just returned from the 60th Anniversary of the Liberation of Holland, a trip that made him look forward to each new day. Being the Proud Canadian that he was, Dad made sure his suitcase was full of Canadian flag pins and Emblems to give away. Remaining to cherish his memory are his loving children, John, Joan (Blaine) and Jim (Juanita); mother-in-law Chris Berg; sisters, Wynne and Marge (Victor); as well as numerous nieces, nephews, relatives and friends. Alan enlisted in the Royal Winnipeg Rifles in December of 1941. He served in the UK from 1942 to 1943, and then with the Princess Patricia's Canadian Light Infantry in Italy and Northwest Europe to 1945. Senior appointments that he held were, Staff Officer Headquarters Training Command - Winnipeg; Staff Officer, Intelligence Division, Canadian Forces Headquarters - Ottawa; Operations Officer, British Commanders' in Chief Mission to the Group of Soviet Forces - Germany; Battalion Second in Command, First Battalion in the Queen's Own Rifles of Canada - Calgary and West Germany; and Company Commander and Battalion Training Officer, First Battalion the Queen's Own Rifles - Calgary. After that, he held various positions from 1958 to 1968. Dad was director of the RWR Museum at Minto Armoury and spent countless hours at the Museum and took part in all regimental activities. His love of war history and dedication to the Museum made him the man he was. Dad lived his life using a philosophy learned by living through the war, and he would often ask, Well, are we winning the war? This is how he viewed life and this prompted him to write a book, Fairbairn's War which he so proudly gave to his friends and anyone who showed an interest in this History. Dad was always aware when a good deed was done and would always show his appreciation with a small token. He would send thank you notes, boxes of chocolates or one single rose, he knew how to make you feel appreciated. Dad may have been a military man all the way through, but we the family, got to see the tender and humourous side of him. A Celebration of Alan's Life will be held on Thursday, June 9 at 2:00 p.m. at the Royal Canadian Legion, Charleswood Branch No. 100, 6003 Roblin Blvd. In lieu of flowers, donations in Al's memory may be made to the Royal Winnipeg Rifles Trust Fund (Museum), 221 - 5445 Roblin Blvd., Winnipeg, MB R3R 3W7. Dad, Tomorrow has no shadow, We will be strong enough to stand, And one day we will meet and Hold each others hand. Pater (Dad) you will be sadly missed, But fondly remembered... WOJCIK'S ALL BELIEFS FAITHS FUNERAL CHAPEL CREMATORIUM 897 - 4665