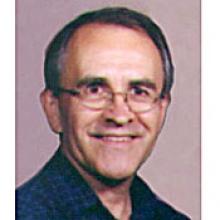 JOHN DAVID BARTLETTE July 6, 1946 - June 10, 2005 In the afternoon of Friday, June 10, following a brief illness, John David Bartlette went home to be with God. At his bedside at the Steinbach Bethesda Hospital was his beloved wife, Lin and his children Sean and Janelle. John was diagnosed with cancer in the month of March and during the remainder of his life the many people who visited him were amazed and blessed by the radiance of his joy and his peace. He didn't question his misfortune but said that whatever happened, it would be a win, win situation. His deep and abiding faith remained unswerving to the end. He was a soft-spoken man, and sought to live his life in a way that would speak louder than words. John was a gifted athlete, musician and teacher. In 1967 he became the Manitoba Featherweight Weightlifting Champion and, although he qualified to compete in the Pan American Games, he chose to study music with the late Dorothy Lawson. He believed that his desire to reach out to people could be better served as a musician. He performed various operatic roles with the Winnipeg Mennonite Theatre, the Manitoba Opera Association, the Winnipeg Symphony Orchestra and he sang with the CBC's Hymn Sing. The passion in John's beautiful tenor voice was inspiring. He was known for his wry sense of humour and flair for comedy both on and off stage, and it was always a pleasure to be in his company. At the onset of his illness, John was working towards his black belt in Judo. For 27 years John, known as Mr. B to his students, taught at the Blumenort School. He strove to find the best in all of them. Being with young people was invigorating and challenging, and he said that he wouldn't mind teaching 365 days of the year. But for all of John's many talents, goals and opportunities the day he met Lin Unger he knew that she and the children they would have, Sean and Janelle, would always come first. Among the many highlights in his life was a year he and his family spent in Australia in an exchange teacher program, and directing a school choir to an award-winning performance at the Sydney Opera House, with Lin accompanying them on the piano. Another highlight was his trip to his mother's homeland while touring with the Faith and Life Choir in Ukraine. God bestowed many gifts on John, and the greatest of all was John's gift of love. He will be deeply missed by Lin, Sean and Janelle; and by his mother, Louise Bartlette; his brothers and sisters-in-law, Bob and Betty Bartlette, Norman and Betty Bartlette, Peter and Kathy Bartlette; his sisters and brothers-in-law, Marie Lewonchuk, Lenore Berard, Betty and Henry Brandt. He will be fondly remembered by the Unger family, many nieces and nephews, cousins and hundreds of students. He was predeceased by his father Roger Bartlette and sisters Annette Bartlette and Judy Scott. Public viewing will be held at Birchwood Funeral Chapel, 150 Penfeld Dr., Steinbach, Tuesday, June 14 from 7:00 - 8:00 p.m. and family viewing from 8:00 - 9:00 p.m. The funeral service will be held at Emmanuel Evangelical Free Church, 360 McKenzie Ave., Steinbach on Wednesday, June 15 at 11:00 a.m. Interment to follow at the Morris Cemetery. The family would like to thank Dr. Curtis Krahn and the Palliative Care nursing staff at the Bethesda Hospital. In lieu of flowers donations may be made to Bethesda Palliative Care Program, Box 939, Steinbach, MB R5G 1A3 Arrangements entrusted to: Birchwood Funeral Chapel Steinbach Winnipeg, MB 1-888-454-1030 or 1-204-346-1030