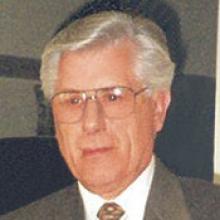 JON VERMEULEN It is with deep regret that we announce the passing of Jon Vermeulen. After a brave battle with multiple cancers, Jon passed away peacefully at home on Sunday, June 26, 2005, with his wife Zella at his side. Besides his wife, Zella of 35 years, he is survived by his son Paul, partner Karina and grandson Mark; daughter Sandra, husband Jef Van Der Brink and grandchildren, Anna, Isobel and Dennis. He will also be missed by Zella's family, Dorothy and Doug Gardiner, Lori and Floyd Johnson and David Rennie; as well as numerous nieces and nephews. Jon was born in Puttershoek, The Netherlands, on December 6, 1932. Following service with Royal Dutch Air Force, during which he earned a degree in Aeronautical and Mechanical Engineering, he immigrated to Canada and spent many years with the Canadian Broadcasting Corporation. Jon never lost his love of flying and at one time was very active in the Winnipeg Gliding Club serving as Chief Tow Pilot and Chief Flying Instructor. He was also rated for Glider Aerobatics. Following early retirement, Jon took up his second love photography and spent many hours touring Manitoba with special emphasis on the Whiteshell and Lake of the Woods. In accordance with Jon's wishes, no formal funeral service will be held. Jon and Zella invite all their family and friends to join together in a Celebration of Life on Thursday, June 30 at 11:30 a.m. to reminisce and raise a glass of wine to your favourite memory of Jon. Refreshments will be served at this time in the Shrine House, 1155 Wilkes Ave., side entrance. Our family wishes to extend a sincere thank you to all members of Palliative Care Manitoba for the care Jon received. Special thanks to Louise Dansereau and Dr. Janice Mulder. In lieu of flowers, donations in Jon's memory may be made to the Winnipeg Humane Society, 5 Kent St., Winnipeg, MB R2L 1X3. WOJCIK'S ALL BELIEFS FAITHS FUNERAL CHAPEL CREMATORIUM 897 - 4665