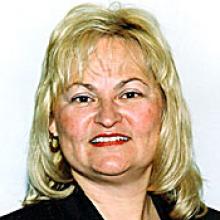 SHARON EVELYN ALLEN (nee MIGEL) It is with tremendous sadness we announce the passing of Sharon Evelyn Allen on Sunday, June 26, 2005 after a long and courageous battle with cancer. To cherish her memory, Sharon leaves loving husband and best friend Les; son Kristopher; daughter Pamela; mother Evelyn Migel; brother Jimmy Migel (Sherrie); sister Diane Bamford; aunts, Helen Stefanyk (Don), Rose Desautels (John); nephew Art Zuke (Darragh); niece Marnie Wachs (Larry) and several great nieces and nephews. Sharon will be sadly missed by many, many friends. Sharon was predeceased by grandparents, Peter and Marie Migel; father Michael Migel; sister Lydia Krupa; sister-in-law Valerie Zuke-Allen and parents-in-law, Les and Sig Allen. Sharon was born November 21, 1950 in Gimli. She spent her childhood and adolescence in Matlock prior to moving to Winnipeg in 1962. In 1968 she met Les, the love of her life and celebrated their 32nd wedding anniversary on June 9, 2005. Sharon attended St. John's High School in Winnipeg. She graduated from U of M in 1972 with an Honours degree in English from the Faculty of Arts. Sharon and Les made their homes in Quesnel, BC (1974-75), Regina, SK (1975-79), Portage la Prairie, MB (1979-2003). They returned to Winnipeg in the fall of 2003. After graduation Sharon was employed by Metropolitan Life and Xerox in Winnipeg. While in Quesnel she was employed by Bank of Montreal and in Regina with Wilson's Office Specialty. In Portage, Sharon first worked for Weber Printing. In 1989 Sharon made a career move to the Daily Graphic as an advertising representative. She was later promoted to Senior Rep and remained with the Graphic until her passing. Sharon was a woman with many accomplishments. She was devoted to the city of Portage la Prairie and the surrounding area, working tirelessly and expecting nothing in return. Some of her involvements were, Welcome Wagon, Strawberry Festival Pageant, Portage Chamber of Commerce (Christmas Cheque Program and Portage is for People), Past President Portage Rotary Club (first female president), Beta Sigma Phi-Iota Chapter, Portage Piranhas Swim Club and The Portage Gymnastics Club. Sharon also taught Jazz Dance for the Portage District Arts Council. She was instrumental in organizing the Winnipeg Symphony Orchestra Fundraiser for the establishment of the Portage Room in Cancer Care Manitoba. Sharon is known by some as the Flood Relief Queen for organizing the provincial flood relief telethon in 1997. In 1998, Sharon was elected as an alderman with the City of Portage. She soon had a resolution passed to change this title to Councillor for all members of city council. As councillor, she chaired the Community Services Committee. She also helped to attract The Simplot potato processing facility to Portage. In addition, she aided in the establishment of Splash Island Water Park and The Island of Lights. Being a great ambassador for Portage and area, Sharon promoted it wherever she traveled. Throughout her career she was appointed to several committees and boards and took a particular interest in her tenure with the Manitoba Film Classification Board. Sharon had many hobbies and interests. She especially enjoyed family celebrations, vacations at the cottage in Sandy Hook and boating on Lake Winnipeg. She loved to travel, always arranging for a winter get-away with Les, Kris and Pam. Her legacy will be the unconditional love she had for her family, her community involvement and her sincere respect and caring for family, friends and strangers alike. The family wishes to thank the doctors and staff at Cancer Care Manitoba and Health Sciences Centre-Ward GH4 for the compassionate care provided. A special thank you to Dr. Brandes, Dr. Vijay, Dr. Horton, and Dr. Muntz. Funeral services will be held on Thursday, June 30, at 11:00 a.m. at St. Chad's Anglican Church, 3390 Portage Ave. Pallbearers will be Jimmy Migel, Don Stefanyk, John Desautels, Art Zuke, Terry Allen and Stan Allen. Honourary Pallbearers will be Linda and Larry Argue, Bev and Ed Connery, Paulette and Doug Connery, Joan and Reg Curle, Sharon and Don Farysey, Elaine and Brian Graham, Brenda and Jim Moorhouse, Heather and Bill Sveinson, and Marni and Larry Wachs. In lieu of flowers donations in Sharon's memory may be made to Cancer Care Manitoba - Breast Cancer Research, or a charity of your choice. Sadly Missed and Never Forgotten We love you Sharon. Arrangements in care of: CHAPEL LAWN FUNERAL HOME CREMATION AND RECEPTION CENTRE 885-9715