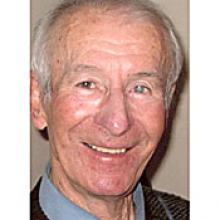 DONALD ROLAND COSGROVE 1929 - 2005 Donald Cosgrove, Winnipeg resident from 1972 to 2004, passed away suddenly in his sleep on Canada Day in his new home in Victoria. He was 76. He is survived by Maureen, his loving wife of 51 years; his children, Daryle, Lynn (husband Mark and daughter Alexa) of Victoria and Blair of Calgary; and brothers, Brendan, Brian and Ken (and spouses). He was predeceased by his brother Desmond and his spouse. Don was faithful to his wife and dedicated to his family. He was a great provider; hard-working and dependable. He brought his family to Winnipeg in 1972 and last year moved with Maureen to Victoria to enjoy their remaining years. His life in Winnipeg was full with work, curling, wine clubs, the specification writers association, food, travel, family and friends. He was delighted with Victoria's green warmth, but had just one year to enjoy it before illnesses took away his mobility and his autonomy. To the end, Don was proud, independent, and showed great dignity. A noble man, indeed.